Man Swallows 40 Knives and Lives to Brag About It

It’s state and county fair time in the U.S. and that means eating contests. Men and women – both professionals and amateurs – will line up behind piles of corn dogs, pies, oysters and whatever else their state takes pride in growing, baking or deep frying and attempt to eat the most the fastest. However, none will come close to the feat of one Jarnail Singh of India who recently swallowed 40 sharp metal knives and lived to brag to his friends who were most likely still holding his beer.

Let’s pause here for the obligatory “don’t try this at home” warning and yes, we’re aware of the eating disorder known as pica and we know it’s nothing to make fun of. Happy now?

Back to Jarnail and his knives. According to a report in the Times of India, the 42-year-old police officer (don’t the have donuts in India?) checked into a hospital on August 19th complaining of stomach pains. The first X-ray showed a solid dark mass in his stomach so (after checking to make sure it was covered by his insurance) doctors performed an endoscopy and found that the mass was actually a drawer full of knives minus the drawer.

This was very unnerving, I have not witnessed something like this in my career as a doctor.

Dr. Jitinder Malhotra, one of the team of doctors brought in, said he was shocked not just at the number but at the nonchalant attitude the patient had about the knives. 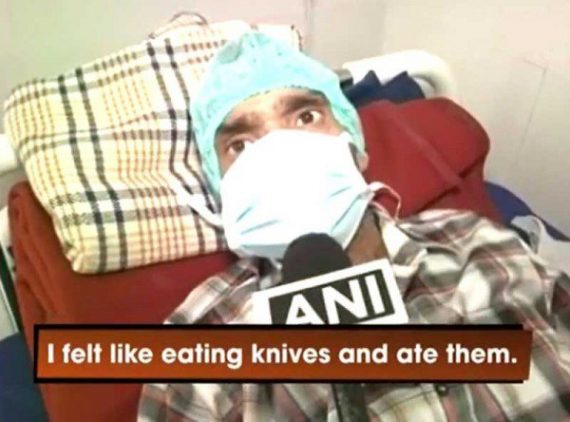 Singh claimed he had started eating knives two months before after a car accident, which probably triggered the psychological condition that lead to his pica disorder. Further X-rays, along with the patient’s estimate as to how many he’d eaten and the fact that some of the folding knives were open and others had broken or rusty blades, prompted the hospital to pull together a team of surgeons, physicians and critical-care doctors to operate.

In my 20 years of practice, this is the most dreadful surgery I have ever seen or done.

Dr. Jitinder Malhotra said the surgery was a bloody five-hour procedure … and a success. Jarnail Singh is expected to be discharged from the hospital after a few more days of recovery.

The Guinness World Records people discourage record-setting eating competitions involving dangerous and especially non-food items so there’s no indication if Jarnail broke any records – official or otherwise. He was a long way from the longest sword swallowed, which was set in 2009 when Natasha Veruschka of the U.S. impressed the judges and potential boyfriends by swallowing a 58 cm (22.83 in) long sword.

If you’re interested in attempting a record with something shaped like a knife but safer to eat, the official record for consuming corn dogs is 12 Fletcher's Corny Dogs in 10 minutes set at the State Fair of Texas on September 28, 2003.