We have less than a year to get ready for the big “OMG! It’s so dark!  We’re all gonna die!” eclipse that will cross the United States on August 21, 2017. Besides the sun going away, the sky going dark, the temperature going down, the birds going silent and the cell phones going up in the air for eclipse selfies, the phenomenon that’s going to scare the socks off of many people is the eerie, chilly wind that changes directions and speed as it blows during an eclipse. Fortunately, science finally has an explanation for it. 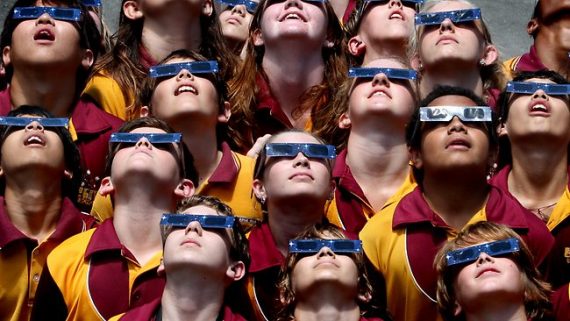 Although the 2017 eclipse will be primarily over the U.S., the explanation for the accompanying ‘eclipse wind’ comes from researchers and meteorologists at the University of Reading in England. However, the actual research was done by over 4,500 volunteer “citizen scientists” participating in the National Eclipse Weather Experiment during the partial eclipse on March 20, 2015. The results were published this week in the journal Philosophical Transactions of the Royal Society A.

Wind data collected by the volunteers from various yard and roadside weather stations was sent to Professors Giles Harrison and Suzanne Gray. They noticed variations in the so-called “boundary layer” of winds between the high-level and ground-level winds. Harrison tells what happens next:

As the sun disappears behind the moon the ground suddenly cools, just like at sunset. This means warm air stops rising from the ground, causing a drop in wind speed and a shift in its direction, as the slowing of the air by the Earth’s surface changes.

That explains what Edmund Halley – the comet guy – described as the “chill and damp which attended the darkness” and caused “some sense of horror” during an eclipse in 1715. It’s taken over 300 years and four visits by Halley’s Comet to finally determine the cause of the eclipse wind.

It’s nice to see that so many British amateur meteorologist and scientists voluntarily participated in this important study during the 2015 eclipse rather than just staring at eclipse boxes, taking pictures and toasting the darkness. Will Americans do the same during the "Great American Eclipse" or with the Internet be flooded with out-of-perspective pictures of people pretending to push the moon in front of the sun?

The Mysterious Case Of Death By Bagpipes