Proof That Birds Are Sleeping While They Fly

The old adage “Let sleeping dogs lie” may be replaced by a new one: “Let sleeping birds fly.” A study of long-distance flying frigatebirds has proven conclusively what had been theorized and observed for years – that they can actually sleep while flying. Even more interesting, the amount of time these birds sleep per day would not even qualify as a ‘nodding off’ for humans. Should we let airline pilots in on their secret?

Bryson Voirin, a post-doctoral researcher at the Max Planck Institute in Germany, authored a new study on frigatebirds – seabirds of the Fregatidae family that can soar over the tropical oceans for weeks at a time. While they do sometimes roost at night, the time is minuscule compared to their long stretches in the air. While researchers observing them in flight have seen signs that frigatebirds sleep while flying (Loud snoring? Sudden jerks like they’re falling out of the sky?), they did not have scientific proof of it nor any explanation of how it happens.

According to Nature Communications, Voirin and the team fixed that by attaching tiny "flight data recorder" to the heads of 15 nesting female frigatebirds on the Galápagos Islands. The devices recorded the brain activity of the birds on their next flights, which in some cases went 1800 miles nonstop over 10 days. When the birds finally came back, the team members retrieved the little black boxes and analyzed the results.

The first of their findings were what they expected. The frigatebirds were wide awake while flying and hunting for food. When evening arrived, their activity switched to soaring and one side of their brains switched to a low-level slow wave sleep (SWS) for a few minutes at a time. This allowed the other side to stay awake and keep track of things.

However, they were surprised to find that frequently both sides of the birds’ brains fell into SWS and occasionally they went into a deep ‘rapid eye movement’ (REM) sleep pattern. In the REM state, their neck muscles relaxed and they actually did a brief bird form of ‘nodding off’.

The biggest surprise was how much total sleep the frigatebirds were able to survive on in flight. The measurements showed only 42 minutes of all types of sleep in a 24-hour day of flying. When back on dry land, the birds act like humans on weekends and catch up on their ZZZs, getting around 7 hours of sleep per day.

Will airline pilots, students cramming for finals and workers on tight deadlines start eating frigatebirds in a desperate attempt to stay awake longer without spending a fortune at Starbucks? Study leader Niels Rattenborg says more research is needed on how frigatebirds accomplish their flights of sleeplessness.

Why they sleep so little in flight, even at night when they rarely forage, remains unclear. Why we, and many other animals, suffer dramatically from sleep loss whereas some birds are able to perform adaptively on far less sleep remains a mystery.

In the meantime, perhaps humans should follow the advice of Ernest Hemingway:

I love sleep. My life has a tendency to fall apart when I'm awake, you know? 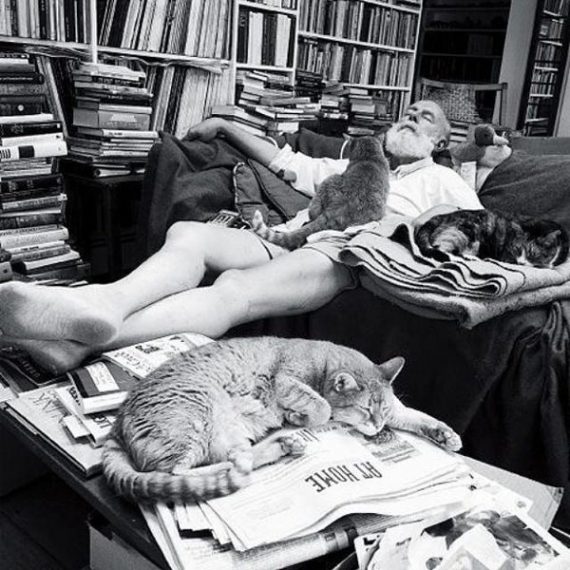