The Search for the Mysterious Round Island that Moves

We have discovered a mysterious island near the Parana river, which, intriguingly, moves and rotates on its own axis. Besides, it features a neat circular structure bordered by another perfectly circular streak of water. It's something REAL and accounts for several supernatural stories bearing connections to UFOs and other paranormal aspects. Nobody knows its history and no one has dared to explore it.

This sounds like a lost episode of Lost but it’s real … at least as real as the Kickstarter program attempting to fund an expedition to The Eye, a mysterious island in Argentina that appears to be in the shape of a perfect circle and moves about in a circular body of water. It looks a little like the pupil of an eye moving around in the iris, hence the name “The Eye.” What is it? Is it worth a buck for The Eye HD wallpaper?

According to the press release and the web site, The Eye was discovered six months ago by Argentine producer and film director Sergio Neuspiller, who was looking for a location to shoot a horror movie about UFOs, mysterious lights, ghostly creatures and other paranormal events that occurred on a remote island. What he found convinced him to ditch the film and go into the mysterious island exploration business.

The Eye is located in the Paraná Delta area between Zarate and Campana near the Parana River. It appears to be a perfect circle with a diameter of 120 meters (394 feet) surrounded by a slightly larger body of water also shaped like a perfect circle. When Neuspiller’s team looked at it using the time control tool in Google Earth, they saw the island move around the circle of water and rotate on its own axis. (See for yourself at coordinates (34 ° 15 '07.8 "S) and (58 ° 49' 47.4" W))

The web site says that the initial expedition to the island encountered “impenetrable vegetation and swamps” that kept them from reaching it. A second trip on a different path took them to The Eye.

We discovered that water is incredibly clear and cold, something totally unusual in the area. The bottom is hard in contrast to the swampy marshes surrounding it. The central part floats, We do not know over what… but it floats. 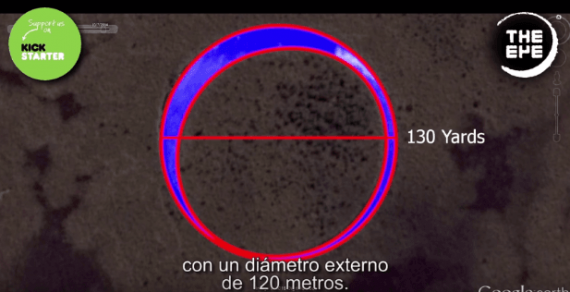 Neuspiller and hydraulic and civil engineer Ricardo Petroni have launched a Kickstarter campaign to raise $50,000 by October 11, 2016, to return to The Eye with “a complete scientific expedition having: Scuba gear, geologists, biologists, ufologists, specialized drones and more, and take samples of the water, soil, plants and all other objects we may find.”

Local residents report seeing bright flashes of light at night near The Eye. Some attribute it to a “Luz Mala” (Ghost Light) from an Indian burial ground. Another witness saw a perfectly round circle of light and there have been reports of cars stalling during the light flashes.

This is not an endorsement (your dollar can certainly be used for better things) but it’s an intriguing project and will undoubtedly be an interesting film or TV special.

Or an incentive to bring back Lost?