Sasquatch, or "Bigfoot" as it is more commonly known today, is as elusive a mystery as any afforded us in North America. While the creature's alleged existence in popular media really only sprang into the public consciousness during the 1950s, plenty of earlier stories exist, which dealt with "giants" in the mountains of Washington State and other remote regions of Cascadia.

One early report that goes as far back as the 1840s appears in the diary of Elkanah Walker, a notable pioneer, settler, and American missionary who travelled through modern day Oregon and Washington State (at that time, they were still known as the Oregon Country). Walker recorded many beliefs held among the Spokane Indians, one of which clearly outlines the familiar legends about the Sasquatch. However, there is one particularly odd note he details about the creatures, and their apparent habits for kidnapping.

Walker wrote the following about the "giants" of the mountains:

"Bear with me if I trouble you with a little of their superstitions. They believe in a race of giants, which inhabit a certain mountain off to the west of us. This mountain is covered with perpetual snow. They (the creatures) inhabit the snow peaks. They hunt and do all their work at night. They are men stealers.

They come to the people's lodges at night when the people are asleep and take them and put them under their skins and to their place of abode without even waking. Their track is a foot and a half long. They steal salmon from Indian nets and eat then raw as the bears do. If the people are awake, they always know when they are coming very near by their strong smell that is most intolerable. It is not uncommon for them to come in the night and give three whistles and then the stones will begin to hit their houses."

There is a curious preponderance of legends among the North American Indian tribes that described these "giants" as kidnappers, often stealing Indian women to have as their wives (for more information about this, I featured a lengthy article that examines such folklore in my contribution to David Weatherly's Wood Knocks Volume 1: A Journal of Sasquatch Research). This narrative is mirrored somewhat in a handful of modern writings as well, with one notable interpretation being the Missing 411 books by author David Paulides. However, Paulides makes no direct association between legends of the Sasquatch and strange disappearances in National Parks, though many readers feel the association is implied in some instances.

There are other early reports from the Pacific Northwest that seem to have bearing on modern events too, whether or not the theme of kidnapping is present. One such story was logged from Happy Camp in Siskiyou County, California, on January 2, 1886, as retold by a correspondent for the Del Norte Record. The story read as follows:

"I do not remember to have seen any reference to the Wild Man which haunts this part of the country, so I shall allude to him briefly. Not a great while since, Mr. Jack Dover, one of our most trustworthy citizens, while hunting saw an object standing one hundred and fifty yard from him picking berries or tender shoots from the bushes.

The thing was of gigantic size — about seven feet high — with a bulldog head, short ears and long hair; it was also furnished with a beard, and was free from hair on such parts of its body as is common among men. Its voice was shrill, or soprano, and very human, like that of a woman in great fear.

Mr. Dover could not see its footprints as it walked on hard soil. He aimed his gun at the animal, or whatever it is, several times, but because it was so human would not shoot.

The range of the curiosity is between Marble Mountain and the vicinity of Happy Camp. A number of people have seen it and all agree in their descriptions except some make it taller than others. It is apparently herbivorous and makes winter quarters in some of the caves of Marble Mountain."

It is interesting that this final reference to the caves on Marble Mountain appears in this early narrative, since this location was home to a more recent encounter involving a group of campers hiking in the area. Shortly after the discovery of a large, crude "dwelling", the hikers (who were fortunately armed with a video camera) noticed something large on an adjacent peak; the tall, gangly figure can be seen waving its long arms, and some of the hikers can be overheard saying the being was "shouting" at them, as it makes its way slowly down the mountain toward them.

The footage then abruptly cuts to a scene of the Marble Mountain area the following morning, and the narrator can be heard noting that there had been no further sign of "our visitor." The video, from such a distance away, does leave much to the imagination. However, what it appears to show is a tall, slim figure, with very long arms.

Researcher MK Davis, whose stabilizations of famous alleged videos of Bigfoot are well renowned, created a similar enhanced rendering of the Marble Mountain footage, a portion of which can be seen below:

The footage is certainly bizarre, and while the skeptical viewer may quickly dismiss it, I invite readers to suspend their disbelief for a moment as you watch this, and give consideration to the long history of strange reports from the Marble Mountain area. What if this truly were one of the "giants" that have been referred to in older literature pertaining to the area?

Among the other early reports from this region, there is one that stands out as being one of the most odd and unsettling cases of an alleged Sasquatch kidnapping. The account was featured in a letter written a few years ago to the Bigfoot Encounters website, which had long been maintained by the late researcher Bobbie Short. The letter in question had been sent by a man whose grandfather had told an odd story about his days working with a railroad operation in the Pacific Northwest. 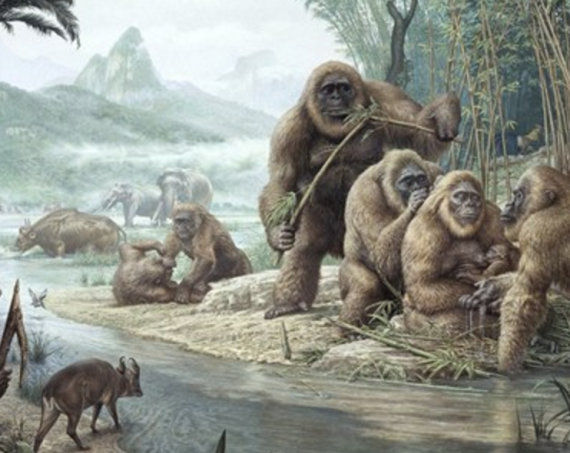 As the story goes, the company would send out pairs of men in small teams that would work clearing the area as they progressed through the wilderness. One afternoon, as the teams were all coming in, one of the men came back alone, claiming his partner had simply vanished. A search for the missing man ensued, but the company's employees were unable to find him. The operation continued for another couple of weeks without further incident.

Then one morning, one of the crews came upon the missing man. His clothing was missing, and he had apparently gone mad, rambling incoherently in an extremely excited state. As they returned to their base camp, the badly frightened man was treated, though he had nearly died from his ordeal in the wilderness. The palms of his hands and feet were raw, and though he died within a few days of his rescue, he did manage to tell the story of his disappearance.

According to the missing man, he had been working the thick brush alone one afternoon, when a large "gorilla" grabbed him and carried him away. While in captivity, the man had been kept in a large pit by the creature, which was apparently a female. He said that the creature "licked his hands and feet raw", so that he couldn't crawl out of the pit. As for the reason it kept him there, he said that the gorilla had repeatedly tried to "mate with him" while he remained in captivity.

In the letter recounting this harrowing experience, the narrator noted that his grandfather was chastised by other family members about the story. In particular, his daughters found it silly, since they told him that there were no gorillas that lived in America.

This very unusual story bears similarity to later reports, which include that of Albert Ostman, a prospector who claimed he was kidnapped in 1924 by a large male Sasquatch, which brought him back to a narrow canyon where it lived with an older female, a young daughter, and what looked to be a prepubescent or teenage male. Although nothing happened to Ostman quite as bizarre as the poor lost railroad worker, Ostman nonetheless claimed that he believed the "old man" brought him back to its home so Ostman might eventually be a suitor for it's young daughter.

There does appear to be an undeniably long-held tradition that involves the Sasquatch as being "kidnappers". We also see prominent locales that appear to have remained constants as far as the alleged whereabouts of these creatures. What are we to make of these stories, and if they were to be given any further credence, could they lend themselves to any broader knowledge we might gain about the Pacific Northwest, its indigenous people, and the legends they have shared over the centuries?

The Mystery of the Phantom Black Flash