Tiny Neural Dust Implants Monitor the Human Body From Within

Scientists at the University of California, Berkeley have developed a new, implantable device that takes us a step further to connecting the human brains with computers--at least, for medical purposes, that is. The "neural dust" is the size of a grain of sand, and serves as a sensor that can continuously transmit wireless, real time data about the nervous system and organs. A sort of teeny internal FitBit, if you will.

As Ryan Neely, a graduate student in neuroscience who worked on the project explained:

The original goal of the neural dust project was to imagine the next generation of brain-machine interfaces, and to make it a viable clinical technology. If a paraplegic wants to control a computer or a robotic arm, you would just implant this electrode in the brain and it would last essentially a lifetime.

And while their technology isn't quite there yet, with DARPA funding, it's getting awfully close. In their most recent experiments the researchers have implanted one-millimeter cubes of neural dust into the muscles and peripheral nerves of rats. The neural dust itself is equipped with a piezoelectric crystal that converts ultrasound vibrations from outside the body into electricity, with ultrasound also being used to read the real time data it provides. 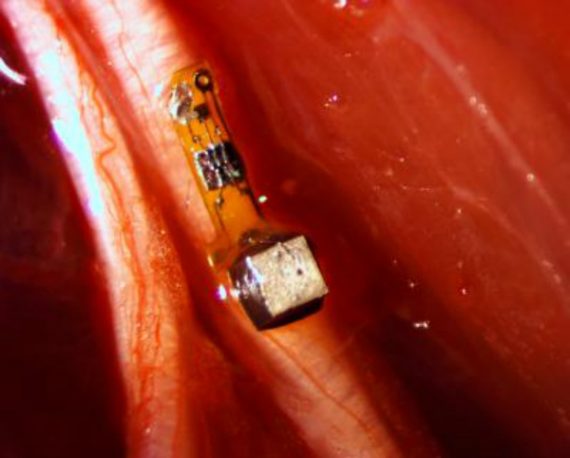 It's already quite a leap, but the real potential lies in creating even smaller granules of neural dust can be shrunk down to a cube that is 50 microns on one side--about half the width of a human hair--then it could be implanted anywhere in the human body. Michel Maharbiz, an associate professor of electrical engineering and computer sciences and one of the study's two main authors said:

I think the long-term prospects for neural dust are not only within nerves and the brain, but much broader. Having access to in-body telemetry has never been possible because there has been no way to put something supertiny superdeep. But now I can take a speck of nothing and park it next to a nerve or organ, your GI tract or a muscle, and read out the data.

And that could replace not only wired electrodes in the brain, but be used to control epilepsy, help control prosthetic devices, suppress appetite and even control incontinence--if you're okay with a computer having control over some of your bodily functions.