This is why we can’t have nice things. Or old things. Or national treasures. Two vandals in Norway damaged beyond repair a 5,000-year-old Stone Age rock carving that may be the earliest depiction of a human skiing in Scandinavia. The famous carving was used as the symbol for the XVII Olympic Winter Olympic Games held in Lillehammer in 1994. Now it’s destroyed forever. 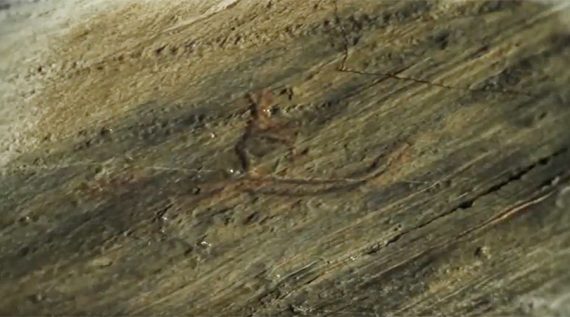 Bård Anders Langø, the mayor of nearby Alstahaug, expressed how most people feel about the carving, which is located at Røøya on the island of Tro off the coast of Nordland in northern Norway. In addition to the skier, the site has Stone Age rock carvings of depicting whales, seals, boats and moose. According to Tor-Kristian Storvik, the county archaeologist for Nordland County, the whale carving also suffered serious damage.

Storvik was called in when locals found that vandals had used a sharp object to gouge around the outlines of the carvings.

It’s a sad, sad story. The new lines are both in and outside where the old marks had been. We will never again be able to experience these carvings again the way we have for the last 5,000 years.

After the crime was reported and the public outcry was heard over the destruction of this national treasure, the vandals turned themselves in. Their names have not been revealed because they’re minors but their feeble attempt at an excuse was revealed: they were “trying to make it easier to see.” Really? The crime is prosecutable under Norway’s Cultural Heritage Act and is currently being pursued.

Destruction of historical artifacts has long been a consequence of politics and war and continues today. War and political and cultural differences does not justify it. Neither does disrespect and stupidity. The teaching of art and art history is on the wane and that brings with it a lack of respect. Rich collectors who pay for antiquities only to hide them for their own pleasure and so-called investment are just as destructive. Why is this? If you're looking for a mystery, that's it.

Artifacts and art belong to all of us. Their destruction hurts us all. Teach your children respect for them.