Was ‘Nessie’, the Famous Monster of Loch Ness, Recently Caught on Film?

Something odd was recently seen passing through the murky waters of Loch Ness, famed landmark of the Scottish Highlands, by a visiting tourist... and she managed to capture it on camera.

28-year-old Calley Tulleth, a mother of three, was enjoying lunch on her balcony overlooking the Loch when she began to notice something making ripples as it made its way through the water below. "I was having my lunch on the balcony looking over Loch Ness," she told the Mirror, "and all of a sudden I saw this blue thing swimming across."

While Tulleth's enthusiasm (and the presence of mind that allowed her to take photos) are to be commended, the photos, which do appear to show something passing through the Loch, leave much to the imagination:

Legends pertaining to the Loch Ness enigma date back as far as the 500s, when Saint Columba was said to have encountered a monster at nearby River Ness, which he cast away by making the sign of the cross. Many scholars note similarities between this legend, and those of other saints who battled water beasts (a notable similar account is that of Saint George and the dragon).

In addition to the numerous--and mostly discredited--photos that have emerged over the years, there have also been films made at Loch Ness that appear to depict something moving through the water. Perhaps the best among these is the film made by Tim Dinsdale in 1960, which purports to show a large animal moving through the Loch:

An enhancement of the film that was made in 1993 led to what some interpret as a large body seen below the water, which accompanies the prominent "hump" visible in the footage above. According to Dinsdale, the object he filmed appeared reddish brown, and appeared to have a darkened blotch of darkened color on one side. Skeptical interpretations of this object have discussed whether the object had merely been a boat, and that perhaps the "blotch" could have been a passenger within.

Among the more qualified individuals to have ever witnessed the strange "something" said to inhabit the Loch was Dr. Denys Tucker, formerly of the British Natural History Museum. Once considered a very reputable and distinguished zoologist amidst his peers, Tucker was visiting Loch Ness on holiday in 1959 when something earth-shattering occurred: as he stood observing the Loch, he was stunned as he watched a creature break the surface, clearly visible as it passed through the waters below.

The encounter had a lasting impact on Tucker, who subsequently wrote to New Scientist, in a letter where he excitedly proclaimed that the creature "could only have been an Elasmosaurus," an aquatic 'monster' of the ancient world believed to have gone extinct 80 million years ago.

"I am quite satisfied that we have in Loch Ness one of the most exciting and important findings of British zoology today," Tucker wrote. Despite his prestige and solid reputation, shortly after the announcement Tucker was sacked, in a rather scandalous affair that was reported by the Daily Mail last year.

While evidence supporting a mysterious creature in Loch Ness is scant, the cryptozoological community isn't left entirely for want. Among the lesser-discussed photographs that may show something large and mysterious beneath the Scottish lake's waters was that taken by photographer James Gray, who was accompanied by his friend Peter Levings when they captured this image in 2001: 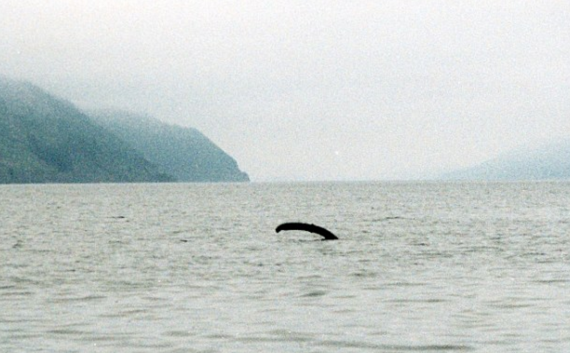 Neither this, or any similar photograph by itself, will prove the existence of "Nessie." Still, there will remain those hopeful-minded among us, who wonder if there may indeed be something of substance to the legends, and the long-rumored appearances of something large, and by all accounts prehistoric that seems to reside in Loch Ness.

Whatever could await us there--if anything of substance at all--may not be all that it's cracked up to be. Nonetheless, the intriguing possibility that there could be undetermined mysteries that have eluded us well into the present is a captivating notion, and perhaps one that does hold some merit.