Zenkerella. It sounds like the name of a new Disney princess but it’s actually an ancient mammal that first appeared 49 million years ago and has long been rumored to still be around today … but no one has managed to see one alive. Until now … well, sort of.

Local trappers brought researcher David Fernandez the bodies of three unusual-looking squirrels on Bioko Island in Equatorial Guinea off the west coast of Africa. He texted a photo of one to the world’s leading (and probably only) expert on what he thought it was and Erik Seiffert, professor of cell and neurobiology at the Keck School of Medicine at USC, confirmed that it was indeed an extremely rare and mysterious Zenkerella insignis, a squirrel-like rodent with a scaly tail.

How rare? Seiffert says there are only 11 known Zenkerella specimens in museums worldwide. How mysterious?

Zenkerella could be seen as the ultimate Pokémon that scientists have still not been able to find or catch alive. After all, it probably only shows up in the middle of the night, deep in the jungles of central Africa, and might spend most of its time way up in tall trees where it would be particularly hard to see.

According to Seiffert’s study in the journal PeerJ, Fernandez and his colleagues are rock stars in the Zenkerella world because the three freshly killed Z. insignis specimens gave scientists the first opportunity ever to examine the DNA of these now-confirmed living fossils.

The DNA samples were compared to other rodents in the online rodent database (yes, there’s an online rodent database) in GenBank and the researchers were surprised to find that Zenkerella is actually part of the Anomaluroidea family of squirrels with scales on the bottom of their tails that are believed to give them traction when climbing trees. They were surprised because the Anomaluroidea squirrels also have webbing on their limbs for gliding while the Zenkerella is webless and grounded. 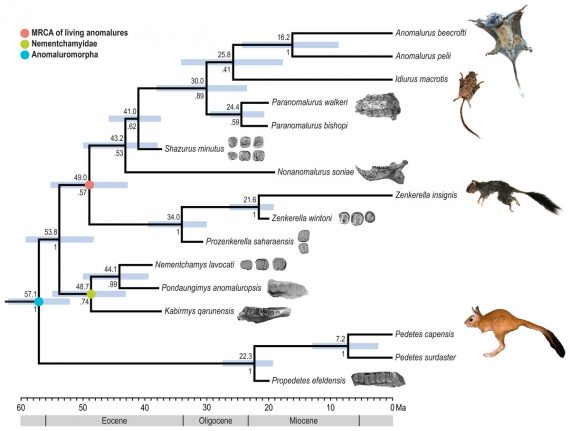 The discovery that Zenkerella is indeed still alive is big news, says Seiffert. It’s one of only six mammal species that are "sole surviving members of ancient lineages" dating back 49 million years to the Eocene epoch that are still alive and unchanged today, making them true “living fossils.”

It's an amazing story of survival. We are only just starting to work on basic descriptions of Zenkerella's anatomy. It's fun to think that there might be other elusive mammalian species out there, deep in the rainforests of central Africa that will be new to science.

Seiffert says the researchers will continue to study the Zenkerella to determine why it doesn’t glide, where it spends most of its time and what it eats.

Why not ask the trappers who brought them in who said they catch them at least twice a year but toss them out because they taste bad?