Another Sighting of a Humanoid in a Bean Field

Cornfields with their mazes and wheat fields with their amber waves of grain get all of the publicity, but nothing much outside of Milagro seems to happen in beanfields. That changed recently when a man in Lima, Ohio, reported seeing a humanoid with “long ears” walking through his beanfield. While unusual, this is not the first humanoid sighting in a beanfield and the British made a big deal when the first crop circle appeared in one. Are we looking for cryptids and aliens in the wrong fields?

It went full sprint towards the bean field, scared the hell out of me. I only saw the back of it, but it had humans legs and ass. I could see the striations in its back, the thing was definitely muscular.

Cryptozoology News reports that the witness, who requested to remain anonymous, said the humanoid was 6 feet tall, had “what looked like grey or pink” skin and sported long ears “like a Doberman,” which probably means they were pointed upwards. He claimed he saw the “muscular as hell in a full stride” humanoid for 30 seconds before it disappeared, possibly into the woods next to the beanfield.

While Cryptozoology News speculates that this is the part of the country where Dogman sightings are common, another humanoid-in-a-beanfield sighting in 1965 suggests that legumes may be more attractive to aliens.

The sighting has become known as the “1965 Washington Bean Field Humanoid Case.” According to a number of reports, two sisters - Ellen G. Ryerson (16) and Laura Ryerson (13) - had been hired to pick beans in a field in Kent, Washington. Their father dropped them off at the field in the early morning around 7 (how times have changed). According to one report, the girls saw three small beings come from the field.

The beings were about 1.6 meters (a little over 5 feet) tall, with white-domed heads, protruding eyes "gray like stone," large pores, and expressionless, deeply tanned faces.

Another report gave more details on the beanfield humanoids.

The first “person” was like a gnome, little, gray wrinkled elf-like being. The other being was approximately 5 feet tall. He had a very unusual head. His face was gray but the back of his head had a bulbous extension with veins showing through it. It pulsated. On the rest of his cranium there were large pores and this part of his head was white. His eyes were described as like a frog’s eyes. In his mouth he had a little pipe. He was blowing in it and making a shrill sound. The tallest one wore “shiny” clothes, like satin. The top was purple and it was put together with the pants into one piece. The top had deep pockets and it had its hands in the pockets so they did not see what its hands were like.

The girls reportedly ran and, when they looked back, the creatures were gone. The incident was allegedly reported to “the UFO Reporting Center run by Bob Gribble” and written about in “Saucer News” and “Flying Saucer Review.”

Should cryptid, alien and crop circle hunters be spending more time in beanfields? 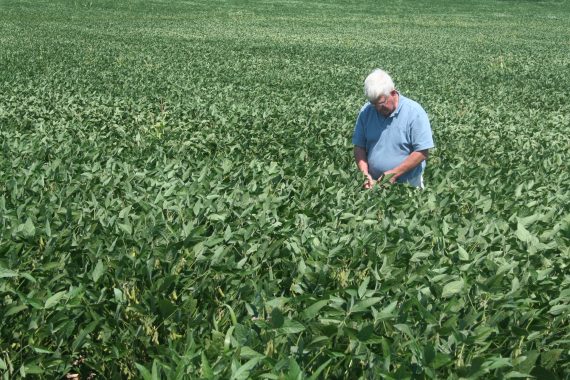