The Hebrew Bible contains an interesting story in II Kings about a particular way of humiliating enemies in defeat.

It was believed that King Hezekiah, The 12th king of Judea who apparently was big on destroying religious cults and abolishing idol worship, also used toilets to desecrate the holy places of others. Evidence of this practice has never been found … until now. Archeologists digging in a holy room in the ancient city of Tel Lachish near Jerusalem found a 2,800-year-old stone toilet that had never been used, meaning it was there for the symbolic purpose of desecration and humiliation.

An opening was exposed in the corner of the room that led to the holy of holies. To our great excitement, we found two four-horned altars and scores of ceramic finds consisting of lamps, bowls and stands in this room. It is most interesting that the horns on the altar were intentionally truncated. That is probably evidence of the religious reform attributed to King Hezekiah.

Sa'ar Ganor, excavation director for the Israel Antiquities Authority, describes evidence his team found that confirmed other ways Hezekiah desecrated the temples of others.

He [Hezekiah] removed the high places, smashed the sacred stones and cut down the Asherah poles [associated with a sacred goddess]…

The toilet was a large chair-shaped stone with a hole in the middle that tests showed had never been sat on for toilet purposes. Sitting was done on benches that were found throughout the six chambers that made up the 80 ft by 80 ft (24 m by 24 m) religious site, which is referred to as the Lachish city gate. 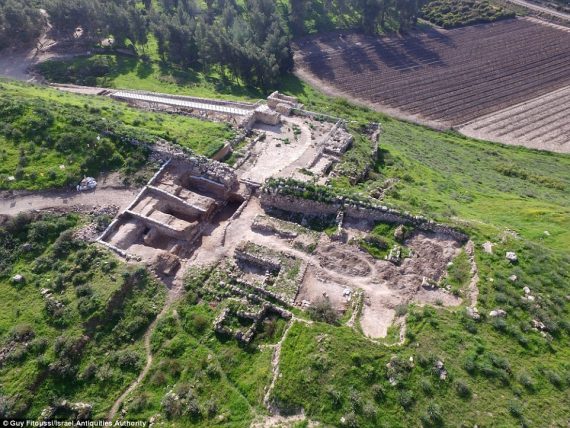 MK Ze’ev Elkin, Minister of Jerusalem and Heritage and Environmental Protection, points out that this is a good example of a story in the Hebrew Bible that is eventually proven to be factual.

The fascinating new discovery at Tel Lachish is a typical example whereby excavations and further research of heritage sites show us time and time again how biblical tales that are known to us become historical and archaeological stories.

Keep that in mind if you find a toilet on your front lawn.

A Strange Tale of a Monster of the Deep