The first thing you wonder when you see the tongue-covered barnacle caught by a California crab fisherman is why he’s fishing so close to a nuclear plant. He’s not. The second thing you wonder is how many more he’s caught without noticing and whether it’s time to switch from crab salad to chicken. In the meantime, videos and pictures of the tongue-and-tooth covered barnacle have been viewed by hundreds of thousands and no one knows what it is.

I have never seen anything like this creature in 40 years of sport fishing. It got caught in my crabbing net as I attempted to lift it to me and noticed it was heavier than usual. The smell was absolutely foul when it got close to me.

Add “stinks like hell” to covered with tongues and teeth and now you wonder why anyone swims in the waters around Port Hueneme Pier near Oxnard, California. Mathew Wallace is the crab fisherman who caught the strange creature and, after taking a video, threw it back in the water. (“Thanks a lot” said thousands of waders and surfers.) He posted the video on his Facebook page and asked for help identifying it.

The colors are unusual so I'm guessing they aren't from around here. Probably a more tropical location. 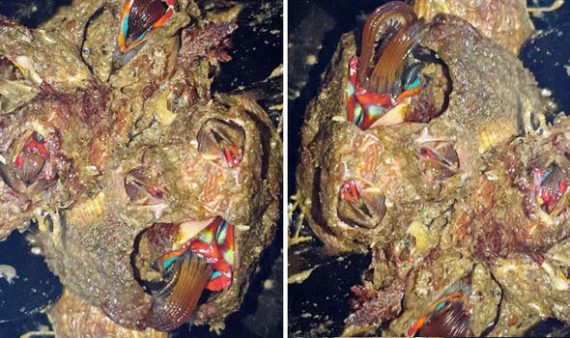 That comment was allegedly from a marine biologist from the California Department of Fish and Wildlife. They can’t do better than that?

Well, maybe not. There are about 1,400 known species of barnacles. The most common are the acorn barnacles stuck to the bottoms of boats. Their glue has a tensile strength of 5,000 pounds per square inch and an adhesive strength of 22-60 pounds per square inch … barnacle glue puts Elmer and gorillas to shame. They’re also hermaphrodites … having both sets of sex organs and not having to appeal to a mate probably comes in handy when you‘re covered with tongues and teeth and stink like hell.

So, did Wallace’s creepy barnacle come on a boat from tropical hideaway, from murky waters near a nuclear plant (we’re looking at you, Fukushima) or from outer space? None of the above, says the EarthTouch News Network. It’s actually a cluster of Megabalanus californicus – better known as California barnacles.

Yep, the creeps are local creeps, according to the marine biologist they consulted, Alex Warneke. She says the Megabalanus californicus is known among barnacle experts for its bright colors and those teeth and tongues are actually legs – OK, that’s pretty creepy too. The strange appearance was caused by algae and other creatures attached to it – yep, the barnacle had barnacles. And the size of the barnacle was due to the fact that it was actually six barnacles stuck together by the “encrusting sludge” which also was the cause for the gross smell.

This positive ID of the clump of California barnacles means it’s safe to go back in the Oxnard water.

And yes, “Encrusting Sludge” would be a great name for a band.