Elon Musk Has Not Ruled Out UFO in SpaceX Explosion

It’s been nearly two weeks since a SpaceX Falcon 9 rocket exploded during a prelaunch test on September 1st and no plausible explanation for it has been determined. Soon after the explosion, videos of the event were examined and an unidentified flying object was seen near it, prompting speculation that the explosion could have been caused by an outside force. When a Twitter follower asked about it, SpaceX founder and CEO Elon Musk responded: 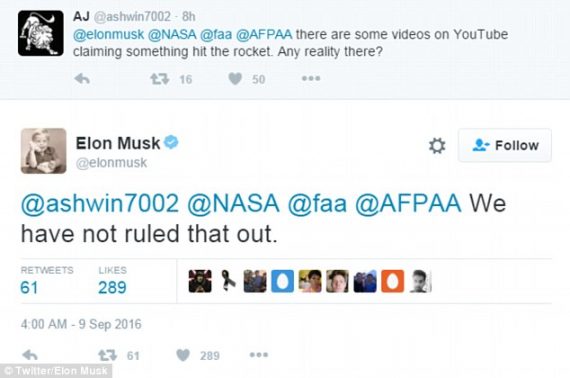 Note that Musk is not yelling “It’s aliens!” but he admits he is open to the possibility that something out of the ordinary away from the rocket interfered with the test in some way and caused the explosion. There is also no explanation for a mysterious sound heard in the video just before the explosion which some analysts say resembles a metal joint cracking under stress. However, Musk has not ruled out the unusual.

Particularly trying to understand the quieter bang sound a few seconds before the fireball goes off. May come from rocket or something else.

The SpaceX founder and CEO calls the mysterious rocket explosion “the most difficult and complex failure we have ever had in 14 years.” Could this be because a $200 million AMOS-6 communications satellite from Facebook that was supposed to bring internet access to remote regions of Africa was destroyed in the fire? Or is it something worse? 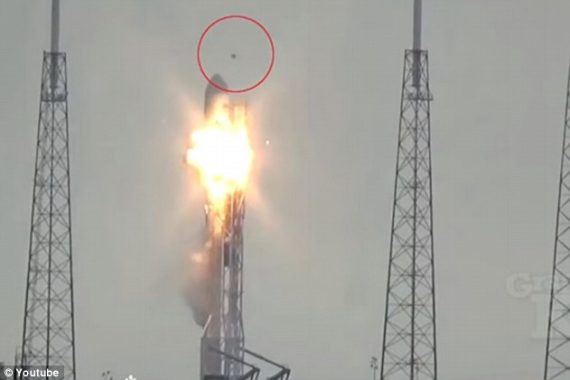 Musk is used to getting answers, so it’s expected that a mysterious and expensive accident with no obvious or scientifically discernible cause is a source of severe as well as costly concern. It must also be frustrating for Musk to have to turn to his government competition – NASA, the FAA and the Air Force Personnel Accountability and Assessment System for help, since he probably knows they won’t be of much assistance or they would have solved these types of problems already themselves.

It’s curious that Musk didn’t dismiss the UFO as a bird, drone or debris. Does he know something he’s not allowed to talk about? This current U.S. election campaign has shown that money not only talks, it lubricates the tongues of the super rich to the point where they feel they can say anything without recourse. How much money or what kind of threat would be big enough to keep someone as rich and powerful as Musk quiet?

Perhaps he’s doing an end-around by asking the Twitter world for “support and advice” help in solving the explosion. If someone else exposes the secret, maybe he feels he won’t be held accountable.

Is this about UFOs or is it about money? The answer to that question will determine what we eventually (if ever) find out about the true cause of the SpaceX rocket explosion.

The Family That Slays Together Stays Together: Sadistic Serial Killer Families