They’re he-ere! Well, they’re here if you live in the UK. ‘They’ are giant Asian hornets – sadistic killers of honeybees and painful stingers of humans – and they’ve managed to invade the island from Europe despite strenuous preventative measures. Will Britain’s bees – especially the prized honeybees at Prince Charles’ Highgrove Estate near where the killer hornets were spotted – survive the onslaught before exterminators can eradicate them? IF exterminators can eradicate them? 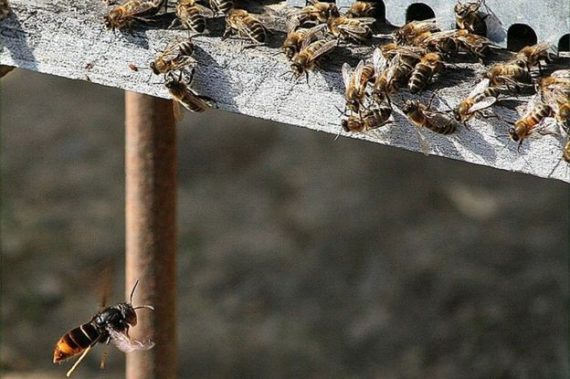 A single Asian hornet (Vespa velutina) was spotted near Tetbury, Gloucestershire, where it was killed and turned in to government authorities. After making a positive identification, the Department for Environment, Food and Rural Affairs (Defra) set up a 5 km (3 mile) surveillance zone to hunt them down. Nicola Spence, Defra Deputy Director for Plant and Bee Health, issued a warning to the invasive hornets:

It is important to remember they pose no greater risk to human health than a bee, though we recognize the damage they can cause to honey bee colonies. That's why we are taking swift and robust action to identify and destroy any nests.

“Damage” is a nice way of describing what these hornets do to honeybees. Being larger than bees (queens are up to 3 cm (1.2 in) in length and workers up to 2.5 cm (1in)), it only takes a few to decimate a hive. Spence describes their brutality:

The hornets hover outside the entrance to the bee hives and as the bees fly out, they kill them by biting off their heads. When enough bees are dead they invade through the entrance of the hive and take the honey. They also eat the baby larvae of the bees too.

Vespa velutina first appeared in France in 2004 and quickly spread across Europe. While their damage was mainly to bees, a handful of human deaths were reported due to allergic sting reactions. The Channel stopped them until this summer when they were discovered on the Channel Islands of Jersey and Alderney.

Is there any hope for Britain’s bees against the hungry hordes of giant hornets? Nest disposal experts have been placed in Tetbury armed with approved pesticides. They’re asking locals to report any sightings of the giant killer hornets but avoid disturbing the nest “under any circumstances.” The Asian hornets don’t like cold weather so winter, at least in the northern areas, should kill them off. However, climate change could eventually make the UK a balmy bastion for the bee killers unless the exterminators stop them first.

It’s not easy being bees.

Humans Have a Sixth Sense About Being Watched