There have been rumors for years of a new hangar being built at Area 51, the highly secretive US Air Force base in Nevada. While some long-rage ground images have surfaced occasionally, no one expected any to show up on Google Earth since satellites were believed to be prohibited over the area. Well, scratch that rumor. New Google Earth images show what looks to be a huge completed hangar that is now the tallest building at Area 51. What could it be hiding? 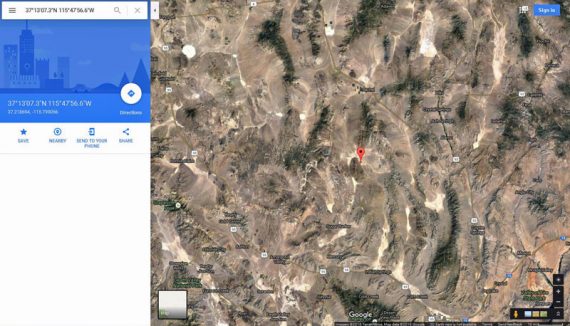 The Google Earth image was unearthed by the folks at The Drive who have a War Zone section where they keep tabs on new military equipment. While the new hangar isn’t military equipment, what’s inside of it certainly is. The fact that its location (Google Earth coordinates 37°13'06.35" N 115°47'51.00" W) is in the remote southern end of the base means it’s probably top secret new aircraft.

The secret southern end of Area 51 is also the location of the last big hangar built there, which the Air Force surprisingly admitted was where Northrop Grumman is building a secret spy drone called the RQ-180. That hangar looks conventional – the new one does not. It’s 210 feet wide by 250 feet long and, while its height can’t be discerned accurately, is the tallest building around. What could need that kind of height during construction or testing?

Area 51’s buildings are deceptive (duh). Some appear to serve no construction purpose but instead are conveniently scattered so the secret test aircraft and drones can be hidden quickly if security is breached (by planes or a satellite not belonging to Google). This new building’s height would be wasted on that usage, so that’s probably not its purpose. This hangar’s remote location could be for security, but it could also be for safety reasons if the aircraft is powered by some new powerful but volatile fuel.

That still doesn’t explain the height. Is it for testing vertical takeoff?

One thought is that the hangar is for the mysterious flying triangles that may be the source of many triangle UFO sightings around the country.

Whatever is going on at Area 51, don’t try breaking in and don’t fly your drones over it if you want to live long enough to see if the Cubs win the World Series this year.