Towards the center of our galaxy, some 8,000 light-years from Earth, astronomers using the Hubble Space Telescope have discovered a gas-giant planet that orbits two red dwarf stars. And while the existence of a single planet orbiting two stars may not be quite as unusual as one might think, the technique used to confirm the trio's existence is a first in astronomy.

That's because a team of astronomers--who have authored a paper on their findings--utilized gravitational microlensing to determine the exact nature of the planet and star grouping. Gravitational microlensing occurs when the gravity of a foreground star bends and amplifies the light of a background star that momentarily aligns with it, enabling the study of dark and obscured objects in space. 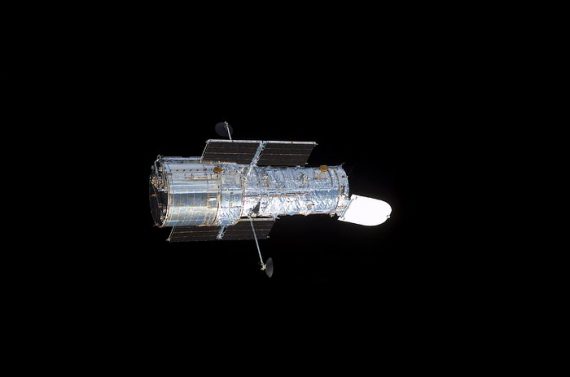 And there's a few groups that are specifically studying the universe with the use of gravitational microlensing--in fact, a collaboration of five of them, including the Optical Gravitational Lensing Experiment, discovered the exoplanet in 2007, and named the three-body event OGLE-2007-BLG-349. But ground-based studies still couldn't quite determine the nature of the system.

David Bennett from the NASA Goddard Space Flight Center, USA, lead author of the study explained in a statement:

The majority of circumbinary planets have been discovered by NASA's Kepler mission, using the transit method of detection. But the data from OGLE and their collaborators, paired with detailed images from the Hubble Space Telescope enabled Bennett and his colleagues to determine the precise nature of OGLE-2007-BLG-349.

It turns out not only is the exoplanet notable for the means by which it was discovered, but also for it's rather large orbit. The planet itself orbits around 300 million miles from the twin dwarf stars, completing a single orbit every seven years. The red dwarf stars, meanwhile are just 7 million miles apart--about 14 the diameter of the moon's orbit around Earth.

As Andrzej Udalski from the University of Warsaw, Poland, and co-author of the study explained:

OGLE has detected over 17 ,000 microlensing events, but this is the first time such an event has been caused by a circumbinary planetary system.

Recent research has suggested that there may be many more events like OGLE-2007-BLG-349 out there, and now that scientists have shown that gravitational microlensing can successfully confirm such events, there is hope that the technique will be put to greater use in future.