Millions of Ants Mysteriously Thrive Under Old Nuclear Base

In Templewo, Poland, near the border of Germany, the Soviet military built, stocked and maintained a nuclear weapons base from the 1960s until 1992. Like many things, it was abandoned after the collapse of the Soviet Union. The storage bunker now sits empty except for the leftover radiation … and millions and millions of ants. Strange ants. Ants that manage to survive with no food or light. Ants whose population grows despite a lack of reproduction. This isn’t the plot of a movie. It’s real. Should we be worried?

According to a new report in Journal of Hymenoptera Research, Polish scientists discovered the colony of ants in 2013 while looking for bats in the bunker. Wojciech Czechowski of the Polish Academy of Sciences writes that they found a small colony of bats and millions of wood ants. They believed that the ants must have fallen into the hole and were unable to crawl back out. The estimated one million wood ants appeared to be getting along well so the researchers left them alone.

Returning in 2015, they decided to take a closer look. That’s when things got strange. Cutting away a small portion of the underground mound, the researchers found no queen, no larvae, no pupae, no empty cocoons … in other words, no sign that the ants were reproducing. They also found no food. Yet they seemed to be healthy and the number seemed to have grown since 2013. The scientists left puzzled … and probably quickly.

In 2016, they returned to the nuclear bunker once again. The cut they made in the mound in 2015 had been repaired and the population had nearly doubled. Yet there was still no food and no signs of reproduction in the frigid bunker. How are these ants surviving and thriving? Radiation?

That would make a better movie. In reality, the researchers found the answer in a rusted ventilation pipe. The original population of ants fell down the pipe into the bunker. They managed to survive by eating each other and working as if this was normal. They were able to live in the cold but it was too frigid for sex.

Why didn’t the ants die off or eat themselves into extinction? More ants kept falling down the ventilation pipe. In fact, the number of ants falling in outpaced the rate of dying, explaining the population increase. As Wojciech Czechowski puts it:

To conclude, the wood ant 'colony' described here -- although superficially looking like a functioning colony with workers teeming on the surface of the mound -- is rather an example of survival of a large amount of workers trapped within a hostile environment in total darkness, with constantly low temperatures and no ample supply of food.

That’s not much of a movie plot. However, there is one strange twist to this dystopian world. The researchers observed that the ants climbed up the walls but never crawled onto the ceiling and back up to the surface. Do they believe a sexless, starving life in an abandoned nuclear bunker is better than life above ground?

What do they know that we don’t? 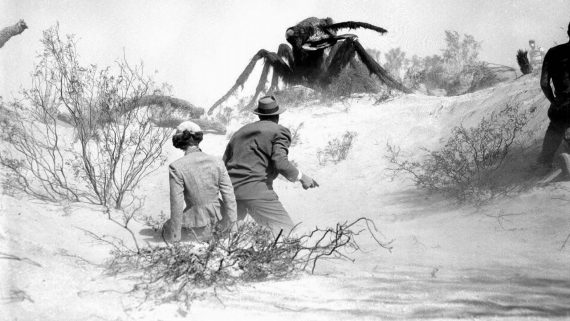 Eight-Foot Werewolf May Be Legendary Beast of Barmston Drain