Mysterious Ghost Redwoods May Be Saving the Giants

They’re giant redwoods but they’re not giants. They’re evergreens but they’re not green. They‘re ghosts but still alive. They’re mysterious but not anymore. They’re the ghost redwoods of the Redwood National Forest and other places where giant redwoods grow. These small albino trees have baffled experts for years and were thought to be parasitic mutants with no useful purpose other than to sell postcards. Not anymore. New research suggests these ghost redwoods may be saving giant redwoods - and possibly the rest of us living things - from pollutants and toxins and sacrificing their green color and massive size for the good of treekind.

They are basically poisoning themselves. They are like a liver or kidney that is filtering toxins.

In his report to be presented at the annual Coast Redwood Science Symposium in Eureka, California, UC Davis doctoral student Zane Moore describes how he found the real and noble purpose of the small albino redwoods that rarely grow over 10 feet tall while attaching themselves to the roots and branches of 250-foot giant redwoods. While cataloging the sometimes secret locations of the 400 or so known albino redwoods (to protect them from vandals, poachers and souvenir hunters – this is why we can’t have anything nice), Moore tested leaf samples and found high levels of toxic metals such as nickel, copper and cadmium.

Albino redwoods in California were first reported in 1866 (Native Americans knew about them long before that). The mysterious white trees were eventually discovered to be mutations of Sequoiadendron giganteum that lacked the gene to make chlorophyll and conduct photosynthesis, forcing them to live off of normal giant redwoods for nutrients. Moore’s research shows that the albinos pay for these nutrients by absorbing toxins that would otherwise harm the giants.

Those heavy metals (Moore is also testing for mercury and lead) may occur naturally in the soil but are more likely to be from railroads, highways, factories and other man-made pollution sources. Dave Kuty, a docent at Henry Cowell Redwoods State Park who helped Moore find the rare albinos, speculates on the how and why.

Maybe the albinos are acting like a sponge — to get the bad stuff out of the soil and the plants. That’s a possibility, but we need to do more research.

That research could lead to the ghost redwoods shedding their parasitic reputation and become hardworking natural pollution fighters. Moore believes they could be cloned and planted to clean up other polluted areas, such as toxic waste sites. 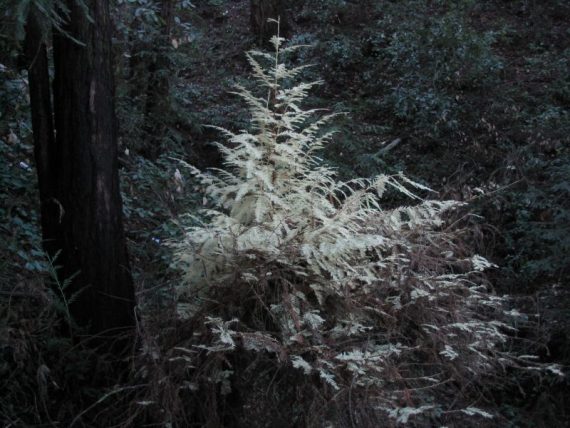 Emily Burns, director of science at Save the Redwoods League in San Francisco, waxes poetic about the ghost redwoods.

There’s nothing like walking through the forest and seeing bright white leaves.

The Curious, Violent Origin Of The Moon