They’re big – some of the biggest things in the entire universe. They’re old – dating back to the birth of the universe. They look green but they’re really not. They glow with a puzzling diffused light. They’re not solid – they’re … well, that’s what’s been baffling astronomers since the first of these giant green space blobs was discovered by the Hubble telescope in 2000. Now they’ve finally figured out what they are and the answer just adds to their mystery.

For a long time, the origin of the extended Lyman-alpha light has been controversial. But with the combination of new observations and cutting-edge simulations, we think we have solved a 15-year-old mystery.

Astronomer Jim Geach, lead author of a new study published in The Astrophysical Journal, is referring to Lyman-alpha blobs – the scientific name for the mysterious giant green blobs first discovered over 15 years ago. The name refers to the wavelength of ultraviolet light they emit called Lyman-alpha radiation. The biog one is 300,000 million light years wide and looks a fuzzy green by the time its light gets to Earth because LAB-1 – the nickname for the original blob – is 11.5 billion light-years away, making it nearly as ancient as the 13.8 billion-year-old universe. 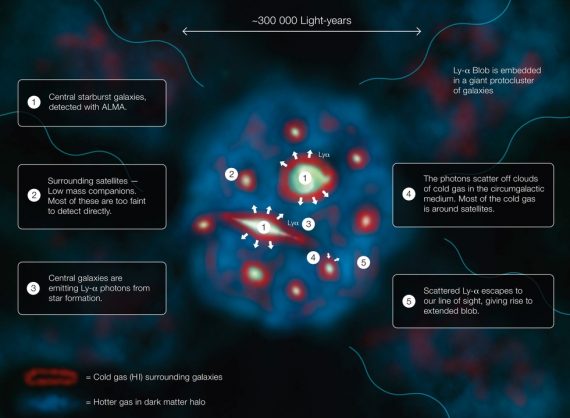 What’s inside the blob took more time, telescopes and computer simulations to figure out. Using the Atacama Large Millimeter/submillimeter Array (ALMA) and the Very Large Telescope at the European Southern Observatory in Chile, Geach and his team of astronomers determined that LAB-1 (SSA22-Lyman-Alpha-Blob-1, if you want to get formal) holds two entire young galaxies that colliding and creating new stars at a rate 100 times faster than the Milky Way. The galaxies are 30,000 to 60,000 light years across and Geach predicts they‘ll become one in a few billion years.

But wait … there’s more. Surrounding the young galaxies inside the giant blob are smaller galaxies (3,000 to 6,000 light years wide) that are also spitting out new stars whose gas may be causing the bigger galaxies to shoot theirs out faster in some kind of massive space competition. (Is this the talent competition for the first true Miss Universe pageant?)

Astronomer – unlike voters – are a skeptical bunch, so Geach and his team created a simulation using NASA's Pleiades supercomputer which ultimately came to the same conclusion that the giant green blob is one of the universe’s early galaxy nurseries. The process of birthing baby stars creates bright UV light and massive amounts of hydrogen gas that acts like a fog diffusing the light that gives these blobs their blobbish shape and mysterious green glow.

Geach is hoping an upgrade to the Very Large Telescope will provide “adaptive optics” that will allow higher-resolution views of LAB-1. The end result will hopefully be a clear picture of what was happening in the early days of the universe and how the first galaxies were formed.

Finally … something good comes out of a mysterious giant green blob. 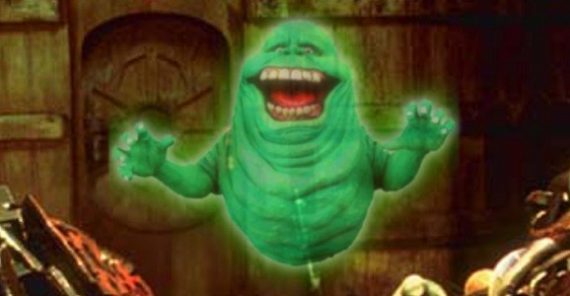 This Weird Organism’s Genes Could Make Us Superhuman