Two independent teams of scientists, based at the University of Calgary, Alberta in Canada and at the University of Science and Technology of China have set new records for quantum teleportation. In their experiments, the teams successfully sent quantum information over several kilometers of fiber optic cables, paving the way for the construction of completely unhackable communication networks that can span entire cities.

Quantum teleportation isn't--as one might excitedly assume--related to some kind of Fortean notion of instantaneously transferring a person from point A to point B. Instead, the term refers to the instant transfer of information between one particle and another, without anything physical passing between them. And that's pretty exciting in its own right.

It works by utilizing a phenomenon called quantum entanglement, in which two particles are linked in such a way as measuring the state of one particle will immediately alter the state of its "entangled" partner particle, regardless of the physical distance between them.

And there have been successful experiments with quantum teleportation in the past. The first experiments took place back in 1997, in which the particles were just tens of centimeters away--impressive, but not especially useful for communication. In 2012, a team at the University of Vienna achieved quantum teleportation over a pretty phenomenal distance of 143 km with the use of lasers. But this experiment took place across completely free space in the Canary Islands, and would be difficult--if not impossible--to replicate with the interference that occurs within cities.

So the Canadian team opted to utilize an otherwise unused section of Calagary's citywide fiber-optic network, and successfully completed a quantum teleportation over 6.2km. Anil Ananthaswamy at New Scientist provides an excellent conceptual description of their method; viewing the experiment as an exchange of a cryptographic key between two participants, Alice and Bob, with a third participant, Charlie, helping to establish the capacity for quantum teleportation.

First Alice sends a particle (A) to Charlie. Bob, meanwhile, creates a pair of entangled particles (B & C), sends B to Charlie and holds on to C. Charlie receives both A and B, and measures the particles in such a way that it’s impossible to tell which particle was sent by Alice and which by Bob. This so-called Bell state measurement results in the quantum state of particle A being transferred to particle C, which is with Bob. 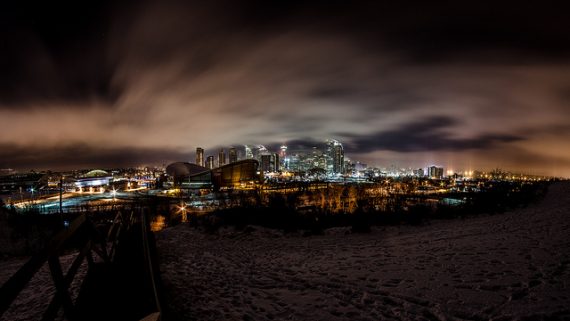 The experiment from the team in China also utilized fiber optic cables, and covered an area of 12.5km. They used a slightly different set up, in which Charlie was in the middle, creating the entangled particles and sending one to Bob.

And these experiments look to be scalable, as Johannes Kofler at the Max Planck Institute of Quantum Optics in Munich said to New Scientist:

The two experiments can be seen as milestones on the path to a long-term goal, namely to build a fibre-based quantum internet connecting large cities.