There are two things you can generally count on when a Loch Ness monster sighting is reported. One – the photo will be blurry. Two – there will only be one monster in the photo. Well, now there’s only one thing you can count on as a blurry image has surfaced of what the photographer claims is two Loch Ness monsters he witnessed swimming side by side.

The photo was reportedly taken on August 21 by Ian Campbell while he was riding his bicycle five miles south of the village of Drumnadrochit on the western shore of Loch Ness. Campbell estimated the two things he saw were about 400 meters (a quarter of a mile) away and each appeared to be around ten meters (33 feet) in length. 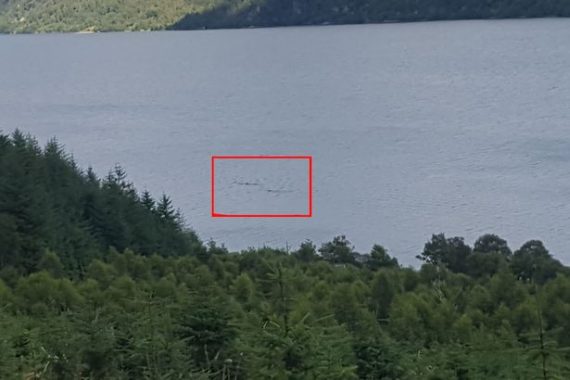 Campbell claimed in an interview that he’s not one “given to flights of fancy” and backed up his photo with an eyewitness account from his 13-year-old son and a female friend who were riding with him.

At the time we saw it we had stopped for a rest and to admire the view. It seemed to appear suddenly from nowhere. "I said to my son: 'What is that in the water?' He said to me that it looked like a big animal. "I said 'I think you're right' and grabbed my camera phone to take a picture. We watched for around 30 seconds before it disappeared from view and by that time Karen had caught up and she saw it for around five seconds. I was saying to my son that we had just seen the Loch Ness monster and he was saying 'Yes, right'.

Campbell offered few additional details other than it was a calm day. There don’t appear to be any nearby boats making wakes. One of the ‘monsters’ looks like it has fins or legs sticking out for propulsion, although log-claimers say those are branches on a log. While there don’t appear to be any other photographs of two or more Loch Ness monsters swimming or standing together, there have been many sightings of multiple Nessies (the most was four), according to a study by Loch Ness expert Roland Watson, author of The Water Horses of Loch Ness. There have also been claims by Loch Ness expeditions taking sonar reading of multiple large objects underwater. It would make sense that Nessie's alleged long existence depends on breeding and that would require males, females and babies.

Did Ian Campbell and his son and friend see a romantic Loch Ness couple out for a swim, a set of young Nessie twins playing or two long objects too far away to identify clearly?