Just when you thought it was safe to go to Brazil now that certain U.S. Olympic male swimmers are gone, news comes of the capture of what appear to be the world’s largest anaconda ever measured. At a length of 10 meters (32.8 feet), not even the world record long jumper (Mike Powell - 8.95 m (29 ft 4.25 in)) would be able to jump it lengthwise.

The giant anaconda was found at the site of the Belo Monte Dam, a massive hydroelectric dam under construction on the Xingu River in the Altamira municipality of Para state in northern Brazil. According to reports, workers had set off explosions to destroy a cave that was blocking progress. While clearing the rubble, they found the giant anaconda. 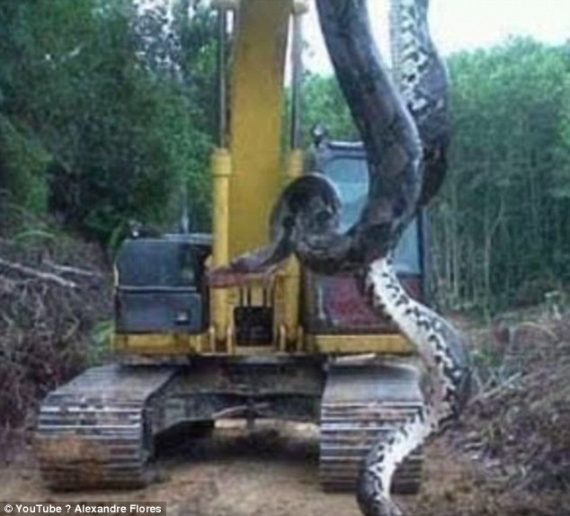 There’s some question as to whether the blast killed the snake or whether the workers – anxious to get on with construction and lunch break – killed it before using a crane to measure it. The snake weighted around 400 kg. (880 lbs) and was a meter (3.1 ft) in diameter. It was loaded into a truck and hauled off to parts unknown – there doesn’t appear to be any record of what happened to the snake after that.

Although the reports say the underside of the snake looked yellow, it was most likely a green anaconda – the largest of the four types. It’s length would take the record away from Medusa, a reticulated python (python reticulatus) that is alive and well in Kansas City, Missouri, and measures 7.67 m (25 ft 2 in) long.

Assuming it's real (which some question), there’s a bit of mystery surrounding this giant anaconda and its video. The snake was discovered in February but the video only surfaced in late September. Why did this take so long? Where was the snake taken to? Does its disappearance have anything to do with the controversies surround the dam? The Belo Monte Dam project has been criticized by indigenous people and many environmental organizations in Brazil and around the world for its impact on people, vegetation, wildlife, natural water supplies and fish – not to mention the increase in greenhouse gases due to deforestation and the increase in industry and motor vehicles.

So the world’s soon-to-be fourth largest dam mysteriously kills what was probably the world’s largest living giant anaconda. Despite the record, there are no winners here.

The Mysterious Transgender Lionesses Of Botswana