What do you do when you find a tightly rolled parchment scroll that’s been burned to the point where it’s illegible and impossible to be unrolled? If it cam from the Dead Sea and is possibly an early text from the Old Testament, you keep it protected until technology exists to read it somehow. That technology is finally here and just such a scroll found 46 years ago has been digitally unrolled and its text proves it’s the earliest version of the first two chapters of the Hebrew Bible’s Book of Leviticus.

This is not one of the Dead Sea scrolls but was found instead in 1970 at the En-Gedi excavation site in Israel. En-Gedi is the site of a large Jewish community dating from the late 700s BCE until about 600 CE. when it was destroyed by fire. The synagogue’s Holy Ark containing its Torah scrolls was found during excavations, but the animal skin scrolls were burned, crushed and turned into chunks of charcoal that crumbled when touched. Fortunately, optimistic archeologists kept them anyway. 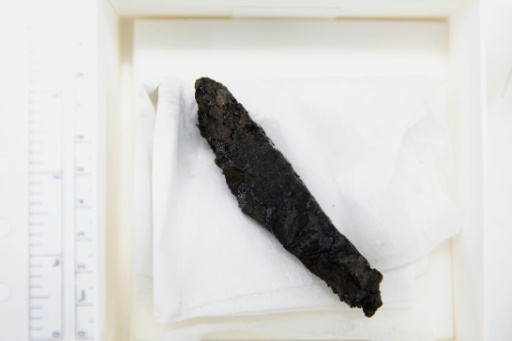 A new study in the journal Science Advances details how the scroll was finally read. Co-author Pnina Shor, curator and head of the Dead Sea Scrolls Projects at the Israel Antiquities Authority, says researchers digitally scanned the rolled scroll with X-ray-based micro-computed tomography (micro-CT). By slowly increasing the spatial resolution of the scan, they determined that the parchment layers showed evidence of ink containing iron or lead.

Lacking equipment to go further, Shor sent the digital scans to lead study author Brent Seales, professor and chairman in the department of computer science at the University of Kentucky. Seales was experienced with a new non-invasive "virtual unwrapping" software technology called Volume Cartography. They first identified segments within the scroll which had five revolutions of parchment. They next laid a virtual geometric mesh over the segments, which was then manipulated and adjusted to make the text more visible. Finally, the manipulated meshed image was digitally unrolled into a 2D image suitable for reading.

That’s when the importance of this scroll became apparent. Not only did it contain the first two chapters of the Book of Leviticus from the third book of the Book of Moses, it was the earliest biblical text ever found. The scroll’s writing contained only consonants – a sign it pre-dated the introduction of vowels in Hebrew in the 9th century. While radiocarbon dating put the scroll in the 3rd or 4th century CE, historical handwriting experts place it at either the first or second century A.D., the researchers said. Regardless, the data suggest that it was written in the first few centuries of the Common Era, making them close to the age of the original Dead Sea Scrolls.

Whenever it was written, experts like Emanuel Tov of the department of Bible at Hebrew University of Jerusalem were shocked that they matched medieval texts of Leviticus 100 percent in consonants and paragraph divisions.

This is quite amazing for us that in 2,000 years this text has not changed.

Let’s not forget the amazing software used to digitally unroll the scroll. Volume Cartography will become freely available next year as open source software and is expected to be used to read some of the unreadable Dead Sea Scrolls and damaged scrolls from the eruption of Mount Vesuvius.