Scientists Solve Mystery of Why This Fish Sings at Night

The midshipman fish--a rather visually grotesque type of toadfish--has one particularly notable trait; they sing loudly after nightfall. So strange are their submarine hums, that when they were heard by California houseboat owners in the 1980s, residents reportedly considered that the sounds could be coming from sewerage pumps, military experiments or even from extraterrestrials. But closer examination revealed the sometimes hours-long nighttime calls were coming from the midshipman, and now scientists believe they know why.

The mystery is not so much what compels the midshipman to make such vocalizations; like many other creatures, the long songs of the fish are sung by male midshipman who are trying to attract a mate. In spring and summer, the males will cosy up among rocks close to shore, and belt out individual hums that can last up to two hours in the hope that a female will join him and spawn. 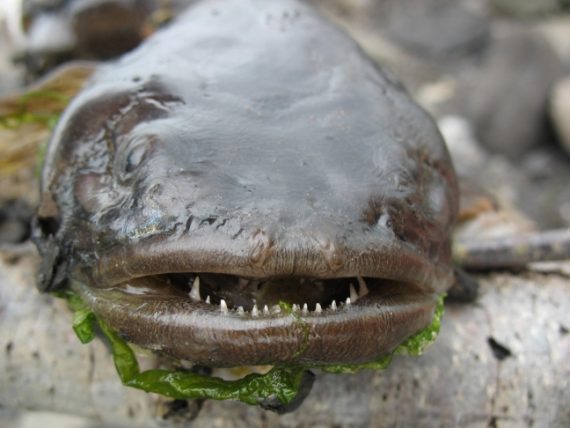 Simple enough stuff, if slightly harrowing for unwitting houseboat owners. But what was a puzzle to scientists is why the midshipman fish only sing at night. So, in an effort to understand this, a team of researchers led by Professor Andrew Bass of Cornell University, collected a number of male plainfin midshipsman specimens from the coast of California and Washington State, brought them back to a lab, and messed with their sleep cycles.

In the study, which is published in Current Biology, Bass and his colleagues first kept the fish in total darkness. In this state the fish maintained a steady pattern of humming and silence, showing that an inner body clock is guiding their calls. But when the scientists exposed the midshipman to endless light, that inner body clock fell apart, and the fish were rendered almost completely silent.

So Bass and his team explored what role melatonin might have in the vocalizations of the fish, as light is known to suppress melatonin levels. In humans, the same hormone helps us to regulate our sleep cycle, and in birds, melatonin tells them when to stop chirping at night. But in the midshipman, the hormone has a rather different effect; it prompted the fish to begin to sing in the light, albeit rather irregularly.

It suggests a practical hormonal trigger has evolved for this specific fish--they sing when least likely to be vulnerable to predators and most likely to find a mate. But it is also unlikely that the midshipman--a fish that has been around since the late Miocene period--is alone in its relationship between melatonin and mating calls.