Some Pigeons Are Learning to Read

If you’re sitting on a park bench, be careful what you browse on your tablet or phone … that pigeon perched near your shoulder may be reading over it and memorizing your password. You read that right (so did the pigeon) – a new experiment taught four pigeons a form of reading and one actually learned to recognize 58 words. Will they team up with the apes that type with their minds and write a sequel to The Birds?

Get all of your birdbrain jokes out of the way now. Finished? 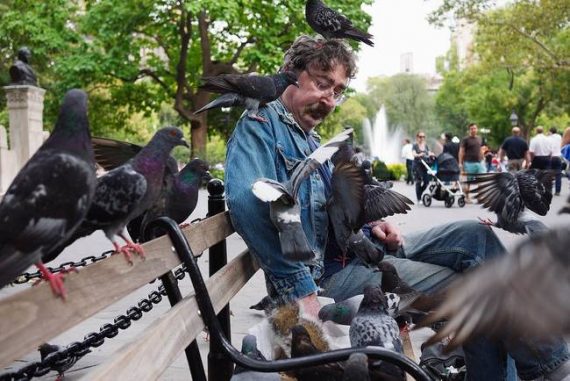 That pigeons — separated by 300 million years of evolution from humans and having vastly different brain architectures — show such a skill as orthographic processing is astonishing.

According to the study results in the Proceedings of the National Academy of Sciences, Professor Onur Güntürkün from Ruhr University in Germany and scientists from the University of Otago in New Zealand started with 18 pigeons and picked the four smartest ones using a training process called “public school.” Just kidding. The process is called “autoshaping” (developed by B.F. Skinner) and starts with conditioning the pigeons to expect to be fed when they saw a single light flash through a small hole or aperture and pecked at it. The smartest ones were then trained to peck at light shining through three holes to get food. The final four moved to words. (There was no indication that the researchers set up brackets or did any wagering.)

Four-letter words were flashed in the holes and the pigeons were trained – one word at a time – to peck at real words for food or at a star symbol if the four letters did not make a word. (A really impressive feat would be to train a pigeon to explain this process). Eventually, they were even able to eliminate real words slightly misspelled because of transposed letters transposed. At the end of the experiment, the pigeons recognized from 26 to a high of 58 real words (the valedictorian pigeon) and over 8,000 non-words.

Are you worried about losing your job to a pigeon yet? Get this … they were also able to learn new words quickly and …

Uh-oh. Baboons can act in movies but pigeons are smarter than them and can read simple scripts. Look out, Keanu Reeves.

OK, are these pigeons really reading? The researchers admit that the birds have no idea what the words actually mean … just that they are words. However, they theorize that the ability to read is the result of neuron shifting or changing in the brain and that if birds, baboons, dogs and other smart animals have a Visual Word Forming Area like humans, it can be trained to shift neurons and link words to pictures. To put it scientifically:

These findings demonstrate that visual systems neither genetically nor organizationally similar to humans can be recycled to represent the orthographic code that defines words.

When pigeons can tell the difference between “coo” and “coup,” we’re in trouble.

The Most Bizarre Cases of Mysterious Phantom Attackers