The Number of White Killer Whales is Mysteriously Growing

What we are seeing is strange. It’s a very high rate of occurrence.

Erich Hoyt of the Whale and Dolphin Conservation in Bridport, UK, is the co-director of the Far East Russia Orca Project and writes in the current edition of the journal Aquatic Mammals about the mysterious abundance of white orcas in the North Pacific. Hoyt spotted possibly the first and certainly the most famous white orca on August 11, 2010. The white male killer whale was named Iceberg and was spotted again two days later in a group that included a second white male orca. 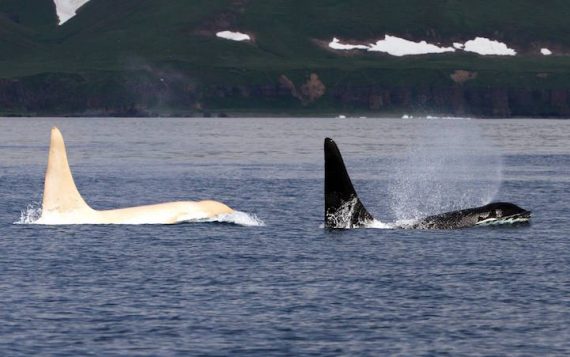 Since 2010, as many as eight different white orcas have been reported in the North Pacific – the only orca area where while killer whales have been found. With a population estimated to be several thousand, this means at least one in 1,000 are born white. That high rate has Hoyt and his colleagues worried about inbreeding and the species weakening that can cause. The only white orca ever captured was an albino female that died at the young age of three.

Are Iceberg and the other white orcas albinos? Hoyt doesn’t know because no genetic samples have been taken from them. What he does know is that orcas are the only known species other than humans who form cultural groups that are genetically distinct from one another, passing traits like hunting styles, vocal sounds and diet preferences down to descendants. 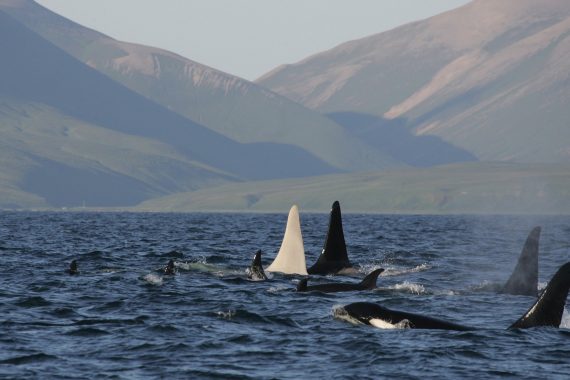 That distinction just adds to the white orca mystery. Inbreeding occurs when populations are small and mates scarce, so albinism would be expected to be seen in smaller orca populations, not in the extremely large North Pacific group. Yet it’s the only one known to produce white killer whales.

Fortunately for Iceberg and his white friends, Siegfried & Roy have retired and Seaworld has ended its orca shows. Let’s hope they survive long enough for Hoyt and Far East Russia Orca Project to figure out why there’s so many of them.