A video has emerged of what appears to be an unidentified flying object zooming behind the Falcon 9 Space X rocket moments before it exploded during tests on September 1, 2016. Does someone or some thing have it in for SpaceX founder Elon Musk? How about for Facebook founder Mark Zuckerberg, whose satellite was destroyed in the explosion? Or was the UFO something else?

SpaceX can confirm that in preparation for today’s static fire, there was an anomaly on the pad resulting in the loss of the vehicle and its payload. Per standard procedure, the pad was clear and there were no injuries.

The use of the word “anomaly” in the first tweets after the explosion made many suspicious immediately that this was something more than an accidental explosion. But what? As videos of the event became available, slow motion revealed something moving from right to left just prior to the explosion.

Initial speculation, as always, was a bug, a bird or a drone. The UFO appears to be behind the towers near the rocket, so a bug flying in front of the camera can be eliminated. The speed at which it enters and exits the view looks much too fast to be any known bird. A drone observing and recording the test would most like be stationary or moving slowly. Again, the speed the UFO traveled doesn’t seem right for an observational drone. Could it have been a secret high-speed military drone? Is someone in some government so upset about private space travel that it’s willing to risk military intervention to stop it?

Then there’s the shape. Magnifications of the UFO show it to be orb-shaped. The shape matches no conventional drones and the speed is too fast for a balloon. 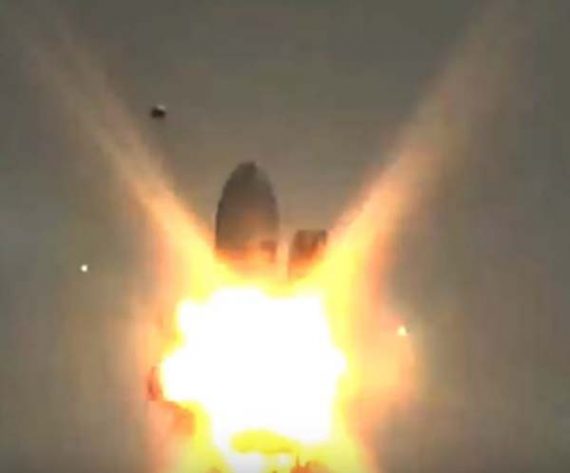 Moving on to other questions being asked. Did the UFO cause the explosion? There are no flashes, lights, beams, smoke or other indications of something being fired from the UFO.

Why would a government want this launch stopped? One theory is that the Facebook satellite would expand Internet access to more people currently without it, putting government secrecy and suppression in danger. The Amos-6 satellite was owned by the Israeli company Spacecom, causing all kinds of speculation on motives by all sorts of governments, militaries and fanatics.

Why would aliens want this launch stopped? Do they hate Facebook too?

Will we ever know what that unidentified object was?