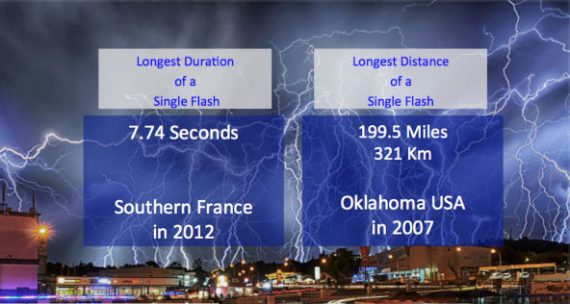 The single longest bolt of lightning sprawled out across a horizontal distance of 321 kilometers (199.5 miles) over Oklahoma in June 20, 2007--which for the sake of comparison is only slightly shorter than the distance from NYC to Washington, DC. The longest lasting bolt of lighting held for 7.74 seconds over the Provence-Alpes-Côte d'Azur region of France in 2012--which is less than two seconds shorter than the time it takes Usain Bolt to run 100 meters.

And this second piece of data throws a slight spanner in the works of the WMO's definition of a lightning discharge, specifically that it is a "series of electrical processes taking place within 1 second." As a result, the WMO committee who prepared the report have, quite rationally, recommended that the Association remove the phrase, “within one second” and replace it with “continuously.” 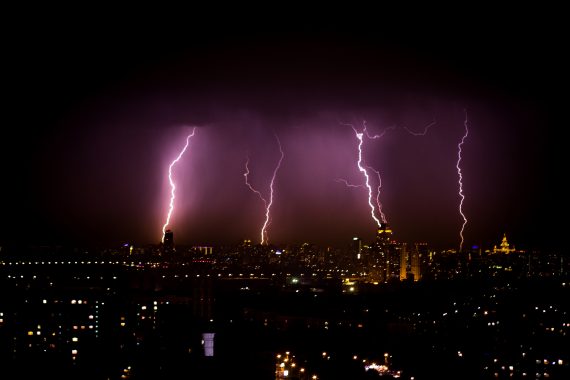 But beyond providing some slightly mind-bending statistics as to just what nature is capable of, and updating an industry-specific glossary, the WMO does hope to make a couple of points.

As Randall Cerveny, chief Rapporteur of Climate and Weather Extremes for WMO, explained in a statement:

This investigation highlights the fact that, because of continued improvements in meteorology and climatology technology and analysis, climate experts can now monitor and detect weather events such as specific lightning flashes in much greater detail than ever before.

Which is pretty helpful if one is an engineer, but for the rest of us, the whole thing is mostly a decent reminder to seek shelter during thunderstorms.

Photos CC by 3.0 SA Dimitry Kalinin and BY-YOUR on Flickr

A Forgotten Society Without Weapons or War Discovered