250,000-Year-Old Aluminum May Be From UFO Wreckage

A chunk of aluminum is on display at the National Museum of Transylvanian History in Cluj-Napoca, Romania. Aluminum was first produced in 1825 by Danish physicist and chemist Hans Christian Ørsted. Is this an exhibit honoring the event? Not even close. In fact, a card next to the metal reads “origin still unknown.” Why? Because scientists have determined that this particular piece of aluminum is 250,000 years old and may have come from somewhere other than Earth. Wait, what?

Also found with the metal piece were two mammal fossils that were estimated to be anywhere from 10,000 to 80,000 years old. Out of curiosity, the researchers tested the metal piece and found it to be 90% aluminum and around 250,000 years old. Even communist scientists knew this couldn’t be true so they sent the metal to a lab in Lausanne, Switzerland, where its age was revised to between 80,000 years (same as the fossils) and 400 years (still predating the invention of aluminum).

Knowing it seemed impossible and that this could be an historic discovery, the communist rulers did what all good communist rulers do … they covered up the story. The Romanian Revolution overthrew the communist regime in December 1989 and government secrets and communist cover-ups are slowly being revealed. It’s taken until now for the strange piece of seemingly ancient aluminum to finally surface again. 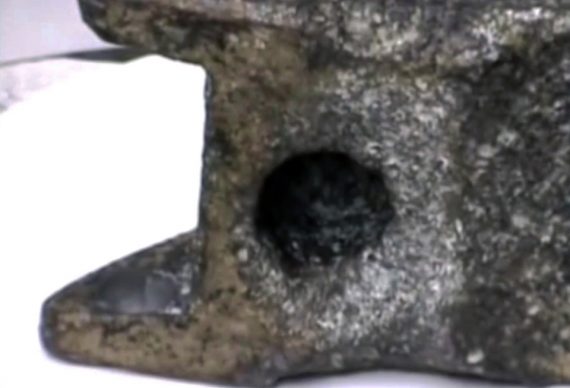 While no further tests appear to have been conducted, Romanian ufologist Gheorghe Cohal, Deputy Director of the Romanian Ufologists Association, weighed in with his expert opinion after seeing the piece:

Lab tests concluded it is an old UFO fragment given that the substances it comprises cannot be combined with technology available on Earth.

OK, the lab tests said it was old, but the rest of that analysis needs backup data or lab reports, which Cohal didn’t provide. That left him open for criticism by Romanian historian Mihai Wittenberger, who says it’s actually a part from a World War II German aircraft, possibly a Messerschmitt. However, Wittenberger didn’t say which part nor offer any thoughts on why multiple tests gave the piece such an ancient and seemingly impossible age.

Is this chuck of aluminum really thousands of years old and from an alien spaceship? A few more tests might give some answers, but this is Romania. Instead, the part is on display in a museum and its “origin still unknown.”

Has anyone checked to see if Wikileaks has any Romanian UFO emails?

Video of Dragon Flying in China Has Many Mystified