A Strange History of Dog-Headed Men

Throughout history we have cases of wondrous and fantastical beasts and humanoids that make appearances in art, literature, and indeed even in ancient bestiaries and the journals of explorers. These oddities are often written of and listed right beside very real known animals and tribes, to the point that at times it can be difficult to tell what might have a basis in the real and what is pure myth and legend. Perhaps one of the stranger creatures to pop up in ancient traveler's tales is the dog-headed man. Seemingly an absurd and unlikely beast to be sure, such creature have nevertheless been prevalent and persistent in a wide range of accounts and writings throughout history, and blur the line between pure legend and possible basis in a kernel of fact.

Stories of purported dog-headed men go back well into history. Mostly referred to as the Cynocephali, which derives from the ancient Greek words “cyno,” meaning dog, and “cephaly,” meaning a disease of the head, these were typically described as essentially humans with the head of a dog, and they feature heavily in stories going across cultures throughout the world, from ancient Egypt, to ancient Greece, to medieval Europe and Africa, as well as in Christian mythology. 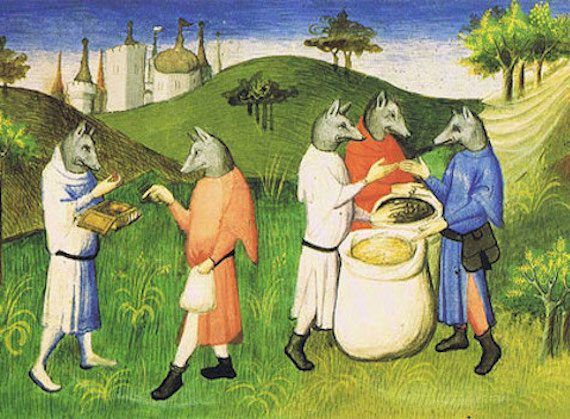 In around 400 BC, the Greek physician Ctesias wrote an intriguing and detailed account of the Cynocephali of the mountains of India, which was at the time known as Indica. In his account he describes a tribe of people with the heads of dogs, who used a series of barks and snarls to communicate, although they could understand the language of humans, and who subsisted on raw meat. They were said to have teeth that were longer than those of dog's, as well as nails that were long, curved and rounded. The tribe is reported to have lived by hunting, roasting their kills in the sun, as well as raising flocks of sheep and goats. They are also told of being fond of the fruit of the Siptakhora, and were known to cultivate this fruit for the purposes of trading it for bread, flour, and cotton, as well as swords, spears, bows and arrows. Ctesias also gave more details on this strange race thus:

They do not live in houses, but in caves. They set out for the chase with bows and spears, and as they are very swift of foot, they pursue and soon overtake their quarry. The women have a bath once a month, the men do not have a bath at all, but only wash their hands. They anoint themselves three times a month with oil made from milk and wipe themselves with skins. The clothes of men and women alike are not skins with the hair on, but skins tanned and very fine. The richest wear linen clothes, but they are few in number. They have no beds, but sleep on leaves or grass. He who possesses the greatest number of sheep is considered the richest, and so in regard to their other possessions. All, both men and women, have tails above their hips, like dogs, but longer and more hairy. They are just, and live longer than any other men, 170, sometimes 200 years. 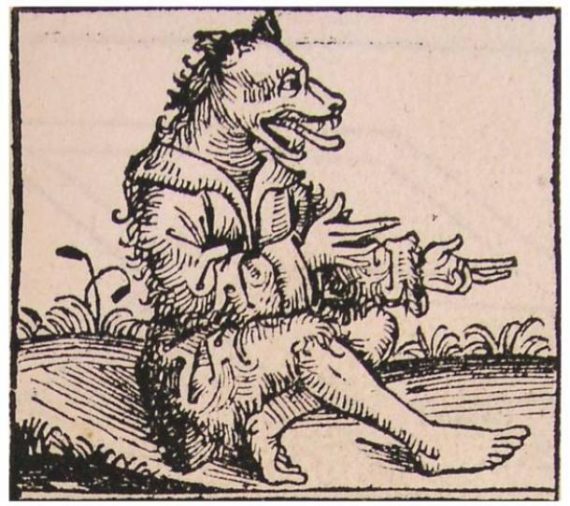 Indeed, at the time India was said to be one of the main habitats of the Cynocephali, and the Greek explorer Megasthenes also told of encountering a race of dog-headed humans here, who wore animal skins, lived in the mountains, and led a life of hunting, speaking with each other through barks and growls. The philosopher Claudius Aelianus wrote of the dog-headed men of India as a peaceful people who ate sun-dried animal flesh and also raised various livestock such as sheep and goats. When Alexander the Great invaded India in the 4th century BC, he too claimed in letters to his teacher, Aristotle, that he had encountered the dog-headed men. Alexander the Great even claimed to have captured several of the creatures in battle, which he said were fierce and vicious, barking and snarling beasts. The Greek historian Herodotus also wrote much on the existence of such creatures, which he claimed ancient Libyans believed inhabited the lands east of their own. He would say of them:

For the eastern side of Libya, where the wanderers dwell, is low and sandy, as far as the river Triton; but westward of that the land of the husbandmen is very hilly, and abounds with forests and wild beasts… Here too are the dog-faced creatures, and the creatures without heads, whom the Libyans declare to have their eyes in their breasts.

Indeed over the centuries many conquerers, missionaries, and adventurers reported coming across these bizarre, somewhat savage creatures. In later times, Roman author, naturalist and philosopher Pliny the Elder listed them amongst various other mysterious types of human, called “the monstrous races,” ranging from cannibals to more surreal humans with no heads, in his work Natural History. They were described as having long claws and chasing down prey.

The Cynocephali would continue to pop up in later times, especially within Christian writings. One popular tale is that of Saint Christopher, who was sometimes depicted in earlier artwork of the Eastern Orthodox Church as having the head of a dog. According to the tale, during the reign of the Emperor Diocletian, a man named Reprebus, Rebrebus or Reprobus was taken prisoner in a battle in western Egypt. He was described as being massive, with the head of a dog and a penchant for barking and eating raw flesh. He then supposedly met Jesus Christ, renounced his ways, got baptized, and was miraculously transformed into human form, after which he led a life pf piety and became a soldier of God, eventually gaining sainthood.

Other medieval writings mentioning the Cynocephali are Paul the Deacon’s Historia gentis Langobardorum, in which he refers to them as a cannibalistic race of dog-headed savages that relish drinking blood and which wage war constantly. The Nodwell Codex, which is most well-known for being the manuscript which includes the epic Beowulf, makes mention of the Cynocephali as “half-dogs,” in a section called Wonders of the East. They are even mentioned in the stories of King Arthur, in which his men do battle with the dog-headed beasts at the mountains of Eidyn, with hundreds of the savages being killed by the warrior Bedwyr. 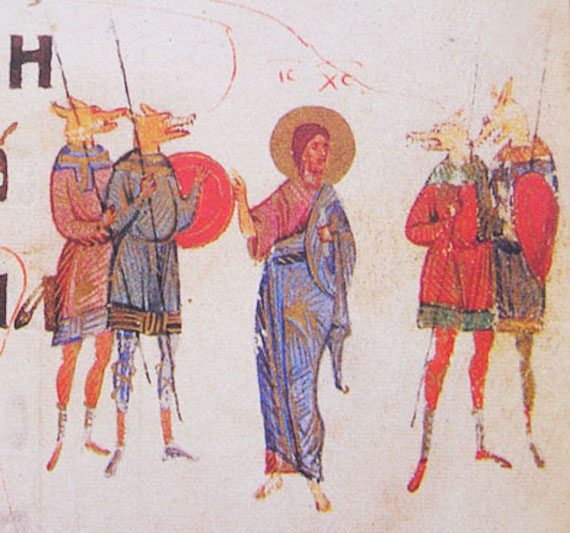 Travelers often wrote of these mysterious dog-headed people. One Italian monk by the name of Odoric of Pordenone, who traveled about converting people between 1317 and 1330, claimed to have come across the Cynocephali at the island of Nicoveran. They were described as being somewhat brutish, but displaying a form of organized religion, worshipping oxen and wearing various gold and silver religious charms. French inquisitor Cardinal Pierre d’Ailley claimed in 1410 that there existed a race of dog-headed humans in India, as well as a one eyed variation of the creatures referred to as the Carismaspi. Explorer Giovanni da Pian del Carpine also mentions a race of dog-heads which he claimed inhabited the lands north of the Dalai-Nor (Northern Ocean), and Lake Baikal. Indeed, depictions of the Cynocephali appeared on maps of the time, similar to the dragons and other wondrous beasts that mapmakers liked to adorn their maps with. The great explorer Marco Polo even writes of the dog-headed people. While describing his travels to the island of Angamanian, he tells of a strange race of people thus:

Angamanain is a very large Island. The people are without a king and are Idolaters, and no better than wild beasts. And I assure you all the men of this Island of Angamanain have heads like dogs, and teeth and eyes likewise; in fact, in the face they are all just like big mastiff dogs! They have a quantity of spices; but they are a most cruel generation, and eat everybody that they can catch, if not of their own race.

The later journey over to the New World would also feature the Cynocephali. Indeed, the famed explorer Christopher Colombus makes mention of such creatures. Upon landing at Haiti, then called Bohio, he writes of creatures the locals referred to as the Caniba, or Canina, with “one eye on the forehead and the head of a dog,” and which were known to eat humans. Colombus would later express skepticism of the existence of such creatures, saying in a letter to Queen Isabella, “In these islands I have so far found no human monstrosities, as many expected.” Nevertheless, the tales were taken seriously by others, such as Diego Velázquez de Cuéllar, Spanish governor of Hispaniola, who in 1519 instructed conquistador Hernan Cortes before an expedition to Mexico that he was to keep on the look-out for “people with huge ears and even some with the faces of dogs.” 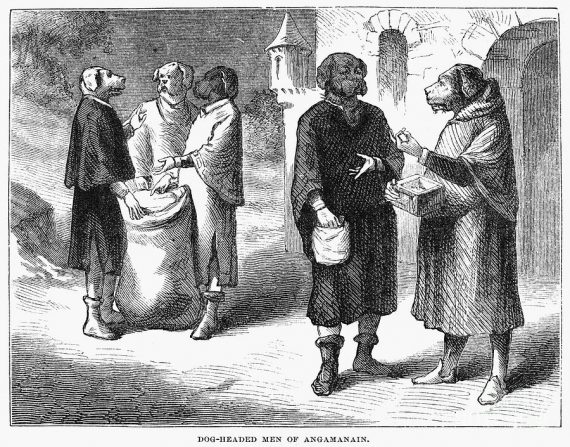 Although such mysterious tribes of strange, dog-headed men have become lost to the mists of time, what is it that caused them to become so ubiquitous throughout history? Was this just fantastical whimsy and imagination, similar to what brought about such amazing creatures as the unicorn, dragon, and troglodyte? Or was this perhaps misidentification of another type of unfamiliar local fauna? Renowned cryptozoologist Bernard Heuvelmans speculated in his book On the Track of Unknown Animals that such stories of Cynocephali, especially in Africa, might have sprung from sightings of a type of lemur known as the indri lemur, which stands at around 3 feet in height. Heuvelmans would say of his theory:

It is the largest of the lemurs known today and is extraordinarily like a little man with a dog’s head. Three feet high and with no tail but an inconspicuous stump, the indris is astonishingly like a man in outline. Like the other lemurs, or half-monkeys, it has a fine and pointed muzzle, which makes its head more like a fox’s or a dog’s. 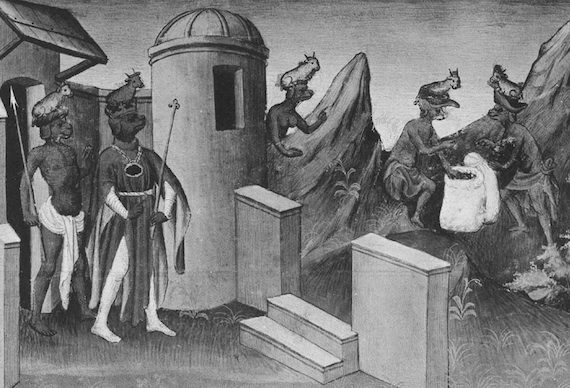 Tribes of Madagascar indeed believed the lemurs to have been twisted descendants of man, warped in form due to their refusal to work for the tribe, so such myths may have contributed to the stories of dog-headed men. Heuvelmans also entertained the idea that the lion-tailed monkey or wanderoo (Vetulus silenus) of India could have been responsible for reports of the Cynocephali. There is also the possibility that baboons or some other form of primate could have been mistaken for dog-headed humans, and indeed in some ancient bestiaries the Cynocephali are listed among primates, sometimes even categorized as both human and animal, as if the cataloguer is unsure how to classify them.

However, could this possibly account for all of the persistent reported sightings and encounters of a dog-headed race of humans that so obviously in many accounts displayed a culture and civilization of their own? Or was this simply the result of myths, legends, or even racial prejudices being bestowed upon enemies or lower social castes? What exactly is going on here? The phenomena of the dog-headed people, the Cynocephali, remains entrenched within the stories and writings of the past, ranging from explorers to philosophers, and is a feature of historical oddities of the weird. It is unclear what they were, if they were ever real in any sense at all, or why they have popped up so often in art and ancient history all over the world. We can only speculate and wonder if there are things lurking beyond the mists of time that we have yet to understand.