Science fiction tales often contain technology which is just a step ahead of current capabilities. Sometimes these predicted fictional technologies become reality. Luckily for Star Wars geeks (like yours truly), a team of physicists from Australian National University (ANU) have made a discovery that puts the lightsaber one step closer to becoming a reality. While researching methods to control light inside quantum logic gates, ANU physicists managed to defy the laws of physics and make light stand still. 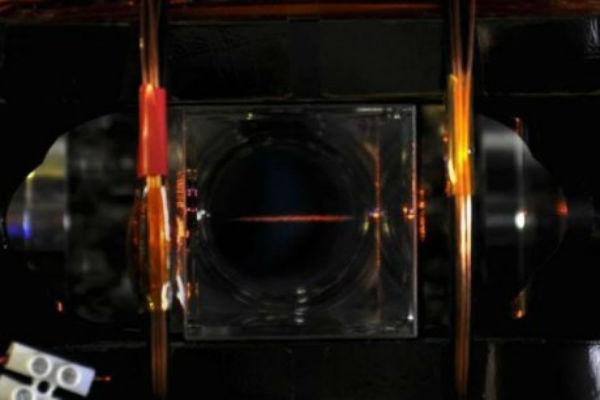 The beam of red light in this photo is a cloud of photons effectively "frozen" in place.

In a press release issued by ANU, lead researcher Jesse Everett states that this discovery verges on science fiction, creating what appears to be a lightsaber straight out of the Star Wars franchise:

It's clear that the light is trapped, there are photons circulating around the atoms [...] It's pretty amazing to look at a sci-fi movie and say we actually did something that's a bit like that.

So-called “stationary light” has been hinted at in previous physics research but has so far been confined to theoretical experiments. The researchers behind this discovery claim this experiment represents the first time that light has been made to stand still in actual laboratory conditions.

According to their data published in Nature Physics, researchers were able to use a super-cold cloud of a rubidium isotope (Rb87) to effectively stop light in its tracks, creating a stationary bolt of light in mid-air:

Here, we demonstrate a form of self-stabilizing stationary light. From any initial state, our atom–light system evolves to a stable configuration that may contain bright optical excitations trapped within the atomic ensemble.

In other words, researchers created a cloud of light-emitting photons that did not scatter in the way light usually does. Further tests will determine if greater concentrations of photons or even single photons can be frozen in space in the same way. Seriously: my life will not be complete if I can’t feel the satisfying thrum of a lightsaber coming to life in my hands. Hurry up, physicists. I’m not getting any younger.