According to their report in the latest issue of the Journal of Fish Biology, biologists at the University of Málaga in Spain say they were sifting through hundreds of Atlantic sawtail catshark (Galeus atlanticus) embryos as part of their research on how their cardiovascular system develops when they saw a two-headed embryo growing inside a translucent shark egg case. If you’re prone to nightmares, you may want to skip their description of it.

Each head had a mouth, two eyes, a brain, a notochord [like a spinal cord] and five gill openings on each side. [Inside the body] were two hearts, two oesophaguses, two stomachs, two livers. 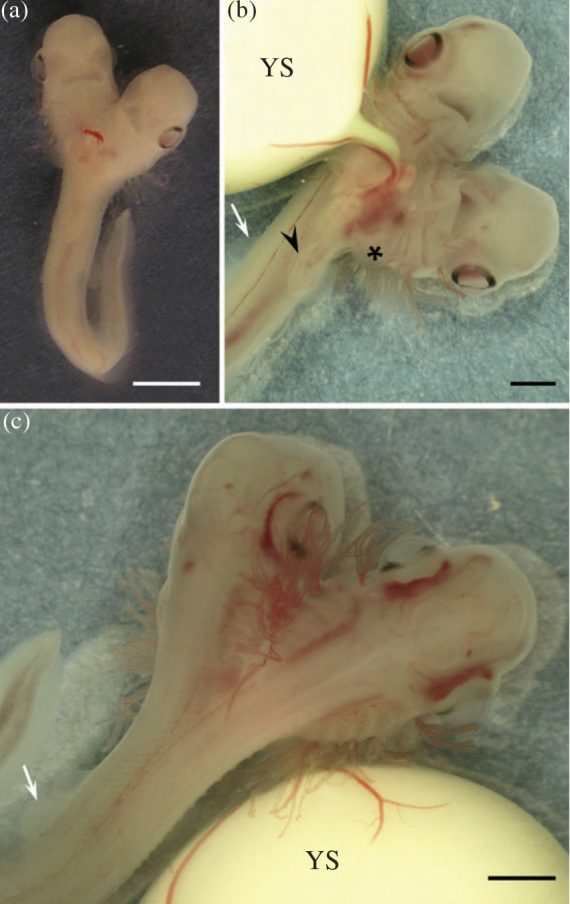 Big deal, you might think. We’ve seen two-headed fish, lizards and mammals before … even two-headed sharks. True, but this is the first known two-headed conjoined twin ever recorded coming from an egg-laying shark. About 40% of the 400 or so species of sharks lay eggs (bamboo sharks, wobbegong sharks, swell sharks and catsharks are examples) while the rest give birth to live young. Two-headed sharks are also very rare among live birthers. Those found in the wild have been young or fetuses so their survival chances are probably slim.

This two-headed shark was found (suspiciously) in a laboratory. Researcher Michelle Heupel claimed the team at the lab had nothing to do with it – it was genetics. Florida Museum of Natural History director George Burgess agrees.

We see two-headed sharks occasionally. It's an anomaly, caused by a genetic misfire. There are lots of different kinds of genetic misfires, and most don't make it out of the womb.

Well, this one did. The study says the team euthanized the embryo in formaldehyde and alcohol to preserve it for further study.

Will they study it to learn how to prevent dicephaly (two-headedness) or to create a species of killer two-headed sharks to help Spain once again rule the oceans?