Failure of the ESA Lander Brings Out the Mars Rover Truthers

Despite the word that NASA’s Mars Reconnaissance Orbiter (MRO) spotted a gouge on the Martian surface made by the crash of the ESA’s Schiaparelli probe, Mars truthers – who believe the Martian rovers are really being filmed on Earth – say the Esa's ExoMars was also a hoax, possibly staged at the same location. Isn’t this too soon? Can’t we at least first have a moment of silence for Schiaparelli?

For those who thought only the moon landings were faked, Mars truthers believe that all of the videos and still photographs of the Martian surface are actually created at a remote NASA facility at Nunavut on Devon Island, which is above the Arctic Circle north of Canada, which it belongs to. It’s the largest uninhabited island on Earth, except for every summer since 1997 when about 100 NASA employees go up and test rovers and other equipment on frozen ground that NASA has said …

… resembles the Mars surface in more ways than any other place on Earth. 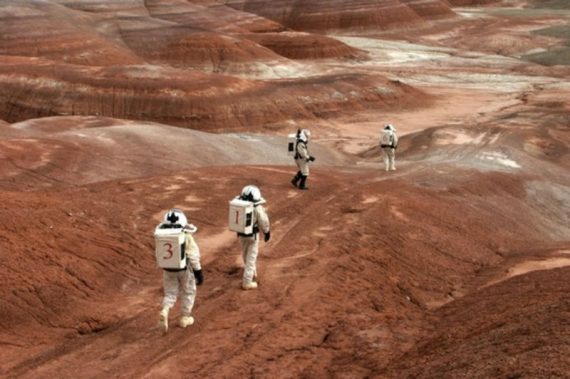 Does that include having humans walking around with the rovers? Sorry, that’s a different conspiracy theory. 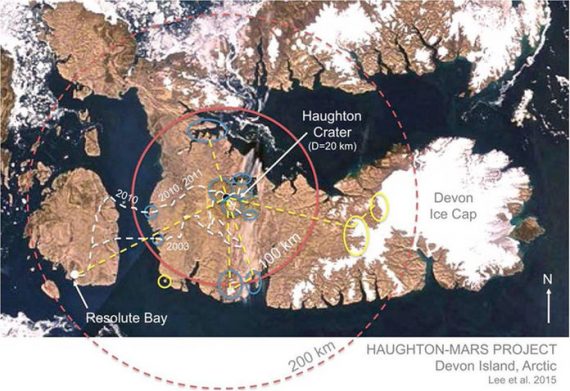 The island even has a Mars or moon-like crater – the Haughton impact crater created 39 million years ago by a meteorite measuring 2 km (1.2 mi) in diameter. NASA loves it, using the island for both human and robot tests.

Because the environment is harsh, isolated, and poorly mapped, it provides an analog for testing planetary exploration strategies, such as safety and telemedicine.

It’s so realistic, some truthers believe that Mars missions actually take off from Earth but are secretly directed to land on Devon Island, which only covers 55,247 sq km or 21,331 sq miles.

Of course, faking all of the activity on Mars would be a much bigger undertaking that faking the manned lunar landings, which were shorter duration and limited to an area that could be recreated on a movie soundstage or in a hangar. It would require cooperation between NASA and ESA as well as with organizations that handle tasks like communications. It would also need to fake images from multiple satellites.

It would be difficult, but humans have been faked out before and most of our fact-checkers are busy with the U.S. presidential election.

If you believe that the Mars missions are real but don’t trust NASA, there’s also the theory that NASA somehow caused the explosion that destroyed Schiaparelli either upon crashing or while it was still in descent. Does Opportunity have a bazooka? Does Elon Musk know about this?

As with many of these truther theories, it would take an awful lot of people keeping an awful lot of secrets for an awfully long time to hide the awful truth that … we already have secret bases on Mars? Aliens already have secret bases on Mars? The money allegedly spent on space missions is actually going to the secret organizations that run everything?

Something Is Killing Off The Scrotum Frogs Of Lake Titicaca