If space aliens land in your town, are they under the jurisdiction of local laws? Should they be? In 1954, the mayor of a small French town thought so and announced he would arrest them for trespassing.

Any aircraft, known as flying saucer or flying cigar, which should land on the territory of the community will be immediately held in custody.

The law seems to have worked so well, the current mayor resisted pressure and announced that it will stay on the books so that ETs continue to stay away. Does he have the right idea or is he just egging for trouble of the Third Kind?

The town is Châteauneuf-du-Pape, a tiny village in southeastern France (population just over 2,000) known for its wine (Châteauneuf-du-Pape Appellation d'origine contrôlée) and its castle completed in 1322 by Pope John XXII as a summer residence for popes. The sleepy village dozed away, except during wine season, until 1954 when the New York Times reported this:

A spate of reports of extraterrestrial visitors to France, coming from regions where the wine is more noted for its strength than its vintage, spread yesterday [Sept. 14] with the speed of a space-cadet. Marius Dewilde, a metal worker who lives at Quarouble (Department of the Nord), made known yesterday that he had seen what seemed to be two Martian visitors at his garden gate last Friday night. They alighted from a cigar-like machine which came to rest on the railway just outside his domicile. M. Dewilde described the visitors as of small stature, clad in something resembling a deep-sea diver’s costume. They had the appearance of human beings, M. Dewilde continued, but when he approached them the machine in which they had arrived set forth with a green beam of light which paralyzed him. When he recovered his sensibilities the cigar was taking off and the two beings had disappeared. The authorities have since noted unusual marks on the cross ties of the railway as though they had been made by the tail skid of some flying machine. 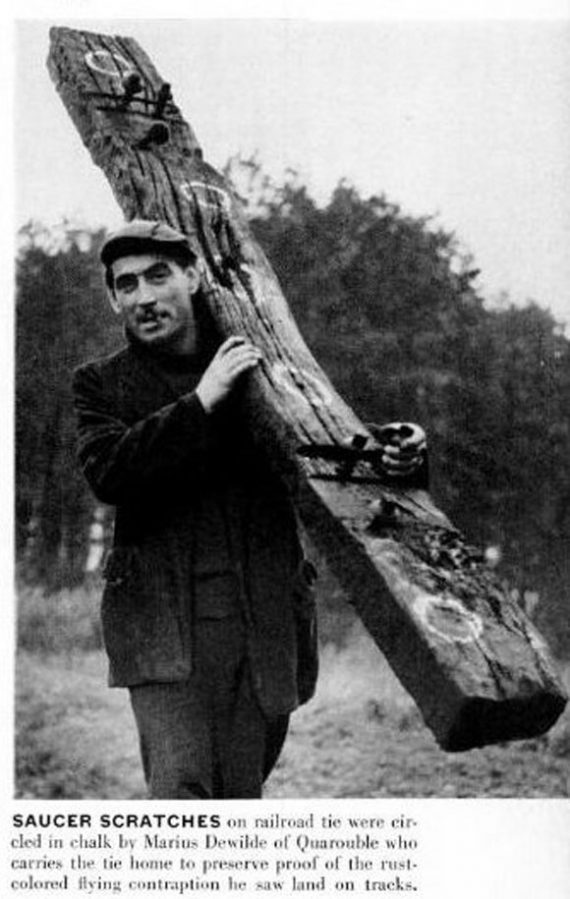 1954 must have been a high panic year for “cigare Volant” (French for ‘flying cigar’) fears as the news of that sighting and others traveled from Quarouble in northern France across the country at the “speed of a space-cadet” (Speed of light? Sound? Buck Rogers?) to Châteauneuf-du-Pape, where mayor Lucien Jeune wasted no time in showing he was a galactic-law-and-order politician by issuing a ban on flying saucers and cigars landing, taking off from or even flying over his village.

Article 1. — The overflight, the landing and the takeoff of aircraft known as flying saucers or flying cigars, whatever their nationality is, are prohibited on the territory of the community.

Article 2. — Any aircraft, known as flying saucer or flying cigar, which should land on the territory of the community will be immediately held in custody.

Article 3. — The forest officer and the city policeman are in charge, each one in what relates to him, of the execution of this decree.

Was he serious? Jeune’s son Elie claims it was a publicity stunt that worked well, bringing reporters from around the world to Châteauneuf-du-Pape for more than just the wine and castle.

Whatever it was, the law is still on the books and there have been no UFO sightings of any shape over the village in 62 years, so current mayor Claude Avril, when asked recently by France Bleu about it, reassured his constituents that he’s just as tough on ETs as his predecessor.

I'm not going to touch the ban.

France Bleu does not report if Claude was winking when he added:

It spices things up a bit. It creates a harmless kind of buzz and no one is getting tricked.

If ETs want to pick up a bottle of Châteauneuf-du-Pape at the source, they’re out of luck. However, they may want to try a bottle of Le Cigare Volant, a wine from Bon Doon Vineyard in California named for the famous banned Flying Cigar.