Giant Frogs on the Loose in Minnesota?

The state of Minnesota is known as "The land of 10,000 lakes." And with very good reason, too: it’s positively teeming with lakes. The actual figure is a highly impressive 11,842. Which brings us to a certain event that occurred in 2013 at Lake Itasca, which is located in north-central Minnesota. As you may guess, we are talking about a lake monster. But, we’re not talking about something akin to Ogopogo or Nessie. And we’re not talking about a huge, expansive body of water, either. Lake Itasca is actually less than 2-square miles in area and has a depth of around 35-40 feet. But, for such a small lake, it is home to a big mystery. And to a big monster, too. Unlike the aforementioned Nessie and Ogopogo, however, to the best of my knowledge, the creature of Lake Itasca has only been seen and reported once. Of course, that will likely provoke conclusions in some quarters that I am the victim of a hoax. Having met the witness, however, I don't personally think that is the case.

Don is a keen outdoors-man who lives in Minnesota’s Clearwater County (which is also the home of Lake Itasca) and someone who had an extraordinary encounter at the lake in March 2013. Yes, it was with a leviathan of the deep. But, no, it was not of the famous, long-necked, humpbacked variety so often reported at Loch Ness. Don’s experience involved nothing less than a huge, monstrous frog. We’re talking about a frog of around...four-feet in length. 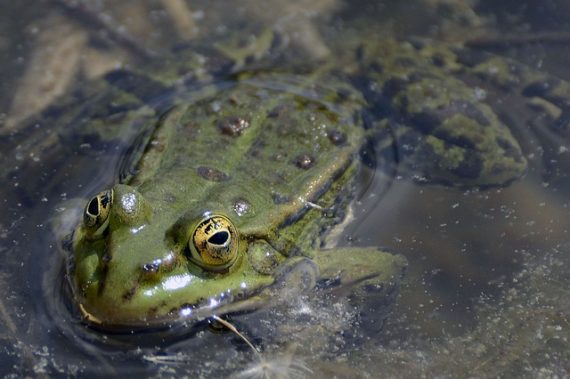 According to Don, it was as he strolled along the lake shore with his German Shepherd dog, Ben, that he saw a sudden disturbance in the water, at a distance of around fifty feet. Puzzled, he continued walking, and kept Ben on a tight leash. Just in case. It was probably a very wise move. As Don closed in, he was both shocked and horrified to see a huge frog crawl out of the water and, for a couple of seconds, peer intently and eerily in his direction. Don, somewhat concerned for his and Ben’s safety, stood frozen to the spot for a few moments. As did Ben. Don quickly thought about taking a picture with his iPhone, at which point the monstrous mutant flopped back into the water, with a powerful splash, and was gone. Such was Don’s amazement, he raced home, got a bunch of provisions, food and bottled water and spent the entire day and night staking out that specific area of the lake. Unfortunately, the beast did not return - ever.

While the idea of a four-foot-long frog might seem like something out of a 1950s-era sci-fi movie, there is something genuinely intriguing about Don’s story. As fellow monster-hunter Ken Gerhard said to me: "If you remember, back in 1995, there were an incredibly large number of deformed frogs that were found in a pond in southwest Minnesota. It made big, national news. It was kind of looked at as a sign of the times: there was so much pollution that man’s impact on the environment was causing these really bizarre frog mutations, where they would have extra limbs, missing limbs, weird eyes, and things like that. So, it has occurred to me over the past couple of years that, perhaps, we’re looking at something very similar here in Texas. It is likely that one or more combinations of chemicals, biological, and physical factors are responsible for causing the malformations."

I most certainly did remember the Minnesota mutations. Such was the concern surrounding a series of bizarre, genetic and physical changes in the frog population, none other than the U.S. Government’s Department of the Interior, U.S. Geological Survey, undertook careful and concerned studies. Its staff noted at its website: "Malformed frogs first became the topic of national news in August 1995 when students at a middle school in southern Minnesota discovered one-half of all the frogs they caught in a nearby pond were malformed. Since then, malformed frogs have been reported throughout Minnesota and elsewhere in the United States and Canada."

On the matter of how, exactly, the mutations might have occurred, the USGS had a few ideas. All of them were controversial and disturbing: "Pesticides are known to cause malformation or death of frogs when present in sufficient concentrations. Studies in Canada show a relation between the percentage of malformed frogs and pesticide use. Methoprene, an insecticide widely used to control mosquitoes, also has been suspected as having caused malformations. Endocrine disruptors also are being studied to determine if they are responsible for some of the frog malformations in Minnesota. Endocrine disruptors are natural and human-made chemicals that interfere with or mimic natural hormones that control development, growth, and behavior of organisms. The number of endocrine disruptors is unknown; only during the last decade has screening of chemicals begun to evaluate endocrine disrupting activity."

The conclusion of the USGS: "It is likely that one or more combinations of chemicals, biological, and physical factors are responsible for causing the malformations in Minnesota frogs. Chemical combinations may be mixtures of natural and human-made organic chemicals, each of which is harmless on its own but toxic when combined. The number of possible combinations of chemicals, biological, and physical factors is enormous, which may explain why finding the causes for frog malformations has been a difficult task."

So, what we have here is official confirmation that frogs – in Minnesota, no less, where Don’s encounter occurred – have been subjected to certain "factors" that have provoked bizarre and extraordinary mutations, such as extra eyes and limbs. In view of that, it may not be entirely out of the question that we are now seeing a new development in the strange saga of Minnesota's mutated frogs.