A video making the rounds on the Internet shows what appears to be a group of motorists in Guangzhou, China getting out of their cars and watching and recording a UFO flying in front of them. If the name “Guangzhou” sounds familiar, you’re definitely a UFO aficionado and probably remember UFO videos from that city in 2011, including one that was called “the clearest video of UFO in history.” After causing quite a stir, that video was proven to be faked. Will the current one suffer the same fate?

Not much is known about the latest video. According to the uploader, it was taken on April 11th, 2016. The people are clearly taking pictures of something in front of them and there’s a object in the sky in the direction they’re looking and pointing. The video is hazy – then again, China is hazy – and was taken from inside a car, possibly by a dash cam. The UFO is fuzzy and gets fuzzier under magnification. No other videos of the incident seem to be available and no other reports appear to have been made, either on the date or afterwards. 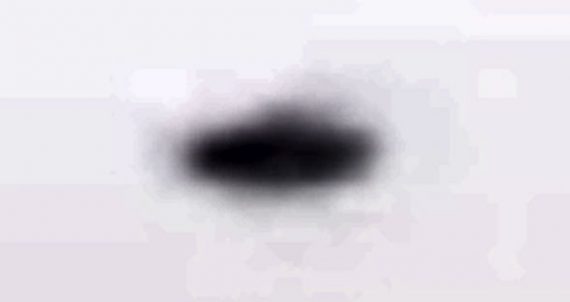 That wasn’t the case with the previous Guangzhou UFO videos. There appear to have been three of the same UFO. The first was alleged to have been taken from a bus on an unspecified date.

The second was allegedly taken from a house on August 6th.

The third was allegedly taken with the UFO flying above a canal on August 30th. That’s the most famous one with people screaming in the background.

One analysis of the last video is a good primer on looking at UFO videos for signs of hoax. Objects on the ground look like were filmed by someone with a shaky hand but the UFO is steady. The reflection of the UFO in the water is not constant. The size of the trees seem to change, particularly in the close-up of the UFO. The color of the sky changes from blue in the normal sighting to grey in the close-up. Even non-experts point out that something that big should have been seen and reported by thousands and shown up on security cameras and possibly even weather radar.

One more hint is the date. The movie Battle of Los Angeles was released in August 2011 with similar alien ships and it was suggested that Chinese animators were trying to imitate or show their superior CGI skills in comparison.

Using all of that knowledge, what do you think of the current Guangzhou UFO video now? Is it a sign that Guangzhou has become a UFO hotspot or a CGI hotspot?