There are an entire host of conspiracy theories that involve the Third Reich, particularly toward the end of World War II, and the supposed technologies the Nazis may have been designing at that time. Ranging from nascent physics and aeronautics innovations capable of producing flying saucers and elaborate underground bases, to the possibility that the Nazis had been planning their own design for a WMD on par with the Manhattan Project, there appears to be a mixture of fact and fiction regarding what, precisely, Hitler and his minions may have had in the works.

In 2010, the Daily Mail reported on the alleged sighting of a “mysterious flying disc” seen in 1944, observed as it flew at low altitude over the River Thames. The incident was reported in numerous credible sources that included the New York Times, though perhaps most tantalyzinf of all had been that there were said to be photographs that accompanied the Times story, detailing the craft’s path as it proceeded “at high speeds over the city’s high-rise buildings.”

Arguably, it wouldn’t be very difficult to recover such images from the Times own archives, if such images did exist. The fact that they haven’t surfaced yet is, perhaps, the best evidence that the story may be based entirely in rumor. But could such strange technologies really have been utilized by the Nazis prior to the end of the War?

While there is at least some anecdotal evidence that supports various advanced projects the Nazis had undertaken, the truth is that there had likely have been other technologies—and far more destructive than supposed “flying discs”—that they intended to build.

The Daily Mail article from 2010 outlined what the Germans had supposedly been developing, which included plans for putting their flying discs in the airspace over Europe:

“[T]he Germans destroyed much of the paperwork on their activities but in 1960 in Canada UFO experts managed to recreate the device which, to their amazement, ‘did actually fly’.

The project was called the Schriever-Habermohl scheme. Rudolf Schriever was an engineer and test pilot, Otto Habermohl an engineer. It was based in Prague between 1941 and 1943.

Initially a Luftwaffe plan after Hitler ordered his airforce chief Hermann Goering to come up with a super-weapon, it was eventually taken over in 1944 by [Hans] Kammler.”

Hans Kammler, a high-ranking officer of the SS, had been placed directly in charge of the Nazi’s V-2 missile program toward the end of the War, though by 1942 he had already had a hand in the majority of the secret engineering projects the Nazis had been undertaking. These included advanced aviation projects, as well as Nazi underground bases, concentration camps, and other facilities for which clearance levels had been ultra-sensitive.

Opponents of the Nazi–UFO connection have argued, however, that if the Nazis had indeed been developing super weapons during the war, it is strange that their field-tested aircraft, captured by Allied forces following the War, were often inferior in terms of their structural design, employing, for instance, wooden components within cockpits that could have benefited greatly from the sturdiness that metal framework would provide. Of course, the reason for such material deficiencies had much to do with the fact that Nazi resources had been dwindling greatly toward the end of the conflict; arguably then, it would have been difficult for the Nazis to construct anything as advanced as the flying discs many purported to be seeing.

In large part, the stories of Nazi flying discs appearing during wartime (and even those featured by more credible news sources) would only be published well after the actual conflict. As researcher Kevin McClure had written of this angle to the mystery, there is literally “not one claim of flying Nazi discs [that] pre-dates 1949 and the increased US media interest in reports of flying saucers.” The very fact that such stories of Nazi UFO technologies remain mere “conspiracy theories” seems to warrant the idea that these technologies, if they did exist, would still be considered highly secretive even today. Thus, it would have been odd that mainstream media sources would be providing commentary on the alleged appearances of such craft.

On the other hand, what if the “appearances” of Nazi flying discs during the War Years had never really occurred, but instead, the reports were fabricated for other purposes… perhaps for use as propaganda? How better to evoke paranoia from an enemy nation than to have a major media source carry stories about the alleged appearances of Nazi secret weaponry which, arguably, had seen a continuance with the ongoing reports of flying saucers throughout the late 1940s and into the height of the Cold War years. Nothing might be of greater concern to any major superpower than to create a public impression that the Nazis may have harnessed secretive technologies… and that someone else might have captured these technologies after the War, improved them, and was now putting them to good use.

While the debate over whether Nazi scientists were building flying saucers remains inconclusive, it is without question that the Reich had their sights on other more potentially devastating technologies. In fact, while it is widely understood that the development of atomic weaponry by the United States had been the key technological development that turned the tides in favor of the allies, over the years evidence that suggests the Nazis were working on developing their own devastating nuclear technology has actually come to light.

On April 15, 1945, a German submarine Type XB U-boat known as U-234 departed from Kristiansand on a course for Japan, carrying along with their German crew a pair of Japanese Lieutenant commanders and two aircraft specialists. Of greater interest than their unique “guest” passengers had been the half ton of uranium oxide later recovered by Allied forces, upon the submarine’s surrender off the coast of Newfoundland one month later. (Radio contact with the captain of a sister vessel, German U-873, had resulted in a message confirming that Adoph Hitler had been killed, hence the decision of the crew of U-234 to surrender to America).

While the discovery of the large amount of uranium oxide aboard U-234 suggested that the Nazis may have intended to use it for a super-weapon, this information was suppressed throughout the majority of the Cold War years; it is nonetheless suspected that the recovered uranium stock contributed to the atomic weapons being developed in the states under the Manhattan Project.

Researcher Joseph P. Farrell has taken the theory a bit further, developing a hypothesis that involves scenarios such as the spiriting of Nazi uranium out of Germany, which was deliberately handed off to American forces in an agreement that might have promised immunity to some of the compliant German officers. Other information that has appeared in various affidavits and official testimony suggests that at least one test of a high-powered explosive device over the Baltic Sea may have occurred before the end of the War, further lending to the fire under the theories of a Nazi atomic weapons program. 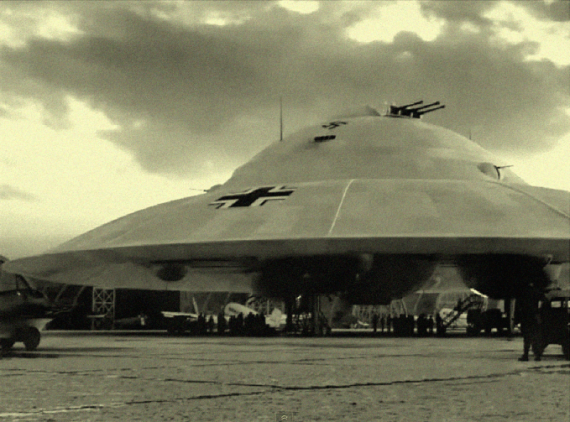 So had the Nazis actually managed to build a functional WMD? Again, the notion seems remote, at least in more conventional interpretations. This doesn’t rule out forthcoming data which might alter the narrative: In an article from the British Daily Mail dated July 13, 2011, the discovery of 126,000 barrels of nuclear waste material in an abandoned salt mine 2000 feet below the Earth’s surface led to new evidence regarding the extent of the Nazis’ supposed nuclear program:

“A statement by a boss of the Asse II nuclear fuel dump, just discovered in an archive, said how in 1967 ‘our association sank radioactive wastes from the last war, uranium waste, from the preparation of the German atom bomb.’

“This has sent shock waves through historians who thought that the German atomic programme was nowhere near advanced enough in WW2 to have produced nuclear waste in any quantities.”

This new information does seem to point toward the historical accuracy of theories that propose the Nazis had taken the necessary steps toward weaponizing their nuclear program:

Although the war hampered their work, by the fall of the Third Reich in 1945 Nazi scientists had achieved a significant enrichment in samples of uranium.

Mark Walker, a US expert on the Nazi programme said: ‘Because we still don’t know about these projects, which remain cloaked in WW2 secrecy, it isn’t safe to say the Nazis fell short of enriching enough uranium for a bomb. Some documents remain top secret to this day.

‘Claims that a nuclear weapon was tested at [the Baltic island of] Ruegen in October 1944 and again at [the Ohrdruf underground bunker complex in Thuringia] in March 1945 leave open a question, did they or didn’t they?’

With a large amount of secrecy still appended to various clandestine programs the Nazis may have been undertaking, it stands to reason that far more may have been going on behind the scenes than many today even realize. This almost certainly had to do with weapons of mass destruction, which could have ended up being on par with the weapons the United States used to bring an end to the conflict.

In all likelihood, there are remaining facets of the Nazi experimental weapons programs that are still hidden from public view; one can only guess what elements have been kept out of view, whether by secrecy, or perhaps intentional destruction that occurred in the final throes of the war. But despite remaining hidden, it is also likely that these innovations–whatever they may have been–have continued to have their technological influence on society, even since the end of the last great global conflict in modern history.

Steampunk, Orwell, and the Techno-Corporate Conspiracy