The first airport that was established on planet earth was in this place.

“This place” is the southern Iraqi province of Dhi Qar and the person making the claim should know something about airports. He’s Iraq's Transport Minister Kazem Finjan and he made this and other bold claims about the area’s alleged ancient contributions to space travel during a press conference. Is he issuing a warning to Iraq’s enemies about some air force secrets or is this just the canon of a loose cannon?

In addition to his statement about an airport built there in 5000 BCE, Finjan also claimed that this was an interstellar spaceport where spaceships were launched on trips to outer space by the Sumerians, the inhabitants of this region during that time period. He also threw in the boasts that all angels are Sumerian and the Sumerians discovered Pluto, which he described as the “twelfth planet.” 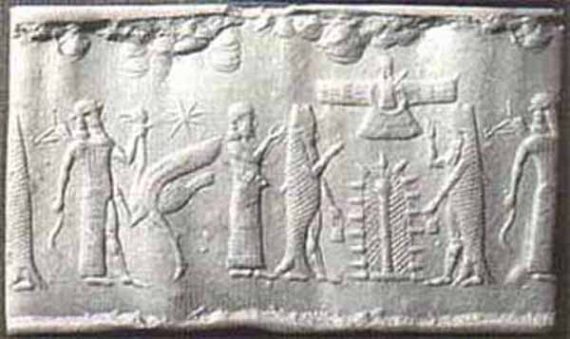 Students of the area know that Sumer was established in what is now Iraq around 4500 BCE and the Sumerians were a pretty sophisticated culture responsible for advances in language, writing, art, architecture, astronomy and mathematics. Students of Sumerian alien theories know that their religious writings refer to hundreds of gods called Anunnaki that the Sumerians believed they descended from and that many believe were actually an alien culture that settled in Mesopotamia and influenced (and possibly even created) humans in the area which became known as the birthplace of civilization.

Students of Iraq’s government are horrified by Finjan’s claims. Iraqi Al Jazeera journalist Amer Al-Kubaisi spoke for many when he asked:

Can you believe that this imbecile is the current Iraqi transportation minister?

It appears that Iraq’s government officials are not allowed to discuss extraterrestrials or alternative origin stories like the leaders in other countries. Perhaps he should have promised to reveal more classified information about this if his candidate is elected, like John Podesta in the U.S. .

There’s not much information available on Transport Minister Kazem Finjan. Is he an imbecile? If so, he has plenty of company. Does he know something about secret space transportation that the leaders of Iraq have kept hidden for thousands of years, waiting for the right time to use? There’s a conspiracy theory waiting to happen.