Halloween – with its sexy costumes and identity-hiding masks - is fast becoming the second-most popular romantic holiday after Valentine’s Day. Both have candy but February 14th has the added gifts of flowers, lingerie and jewelry to help set the mood for love. On the other hand, Halloween has … bobbing for apples? Believe it or not, that party staple could be your ticket to a hot night or long-term relationship if you can slip an enchanted apple into the bucket right before the person of your dreams dives in. Where does this non-poisonous spell-casting fruit get its magical power and can you get a bushel by Halloween?

The Poison Apples of Love’s Desire are available only from the Black Cat Magic Shop in Japan and get their power not from the store’s magician owner but from the place these black-red apples are grown – the magical foothills of the Dewa Sanzen mountains in Yamagata Prefecture. This cluster of three sacred mountains - Mount Haguro, Mount Gassan and Mount Yudono – became known as a religious center in 593 when Prince Hachiko, first-born son of Emperor Sushun, the 32nd emperor of Japan, came there to reflect after the assassination of his father. The mountains and their gods became important to the shugendō religion and later to Shintō and Buddhism. 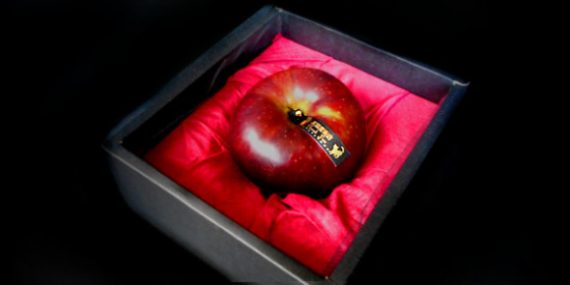 The apples are grown in a small orchard in the foothills where the trees can allegedly absorb the spiritual and love-provoking powers of all three mountains. Only 18 of the apples are provided to the Black Cat Magic Shop, which packages each one individually in its own box, along with the special instructions to release its powers on potential paramours.

Enchantment spells generally require a lock or a few strands of the love target’s hair, which are often placed between halves of an apple which has been sliced sideways so the seeds make a star shape. The halves are put back together, tied with a ribbon, cast with a spell and buried. Fortunately, the Poison Apples of Love’s Desire take less work. After washing the apple, you read the spell out loud to cast it. That’s it. If you need more help, the instructions say you can eat it yourself, give it to the other person to eat or “light it with fire” by baking it into a pie and then serving it.

Unlike those in Disney movies, the Poison Apples of Love’s Desire are not guaranteed to work. You may have better luck using an ordinary Red Delicious with an engagement ring stuffed inside.

Mind-Controlled Computers on the Horizon