Missing Aircraft and Unidentified Flying Objects: Is There Any Legitimate Connection?

On March 8, 2014, the events leading up to one of the greatest mysteries of modern times were beginning to fall into place, as Malaysia Airlines Flight 370 took off into the night from Kuala Lumpur, never to return again.

To this day, despite the discovery of some wreckage identified as having belonged to the plane, few details have emerged that lend hope for understanding precisely what happened to the plane, and those aboard.

Hence, in the absence of a clearly defined narrative that explains the unusual disappearance, much speculation and conjecture has been offered as to what might have happened: theories range from an elaborate suicide by one of the pilots, to a hijacking by Russians, and yes, even extraterrestrial kidnapping. 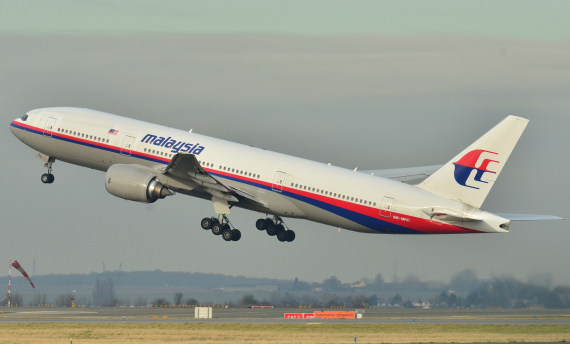 The UFO abduction hypothesis, as it relates to the MH370 situation, is admittedly absurd. Therefore, let's be clear in saying no, it is not our intent here to suggest in any way that an unidentified flying object may have been involved with MH370's disappearance.

And yet, in the absence of further details about the plane's whereabouts, this tenuous UFO connection has reappeared more than once, at least in fringe circles.

Why is this the case? In other words, with no evidence to support such a notion as an ET hijacking of a commercial airliner, what might inspire suggestions that involve UFOs in the first place?

The reason, in likelihood, has nothing to do with the MH370 disappearance at all, and instead focuses on past incidents where planes have purportedly vanished in conjunction with the presence of mysterious flying objects; and in most notable cases of this sort, the disappearances were simultaneously monitored via radar.

In the May, 1961 edition of Fate Magazine, an article by researcher Tom Comella titled, "Have UFOs 'Swallowed' Our Aircraft?" discussed a pair of alleged plane disappearances that may have been related to unidentified flying objects. In the account given by Comella, he and three other UFO investigators arranged for a meeting with representatives with the Air Technical Intelligence Center at Wright-Patterson Air Force Base, with hope of discussing a pair of cases involving UFOs seen at low altitudes above residential areas. The initial meeting was planned for February 1956, and a response was not issued until June of that year, in which one of the UFO investigators was visited by a "M. Sgt. Hill", leading to an exchange that has since become famous in UFO circles for Hill's emphatic statement that UFOs were being studied by our government to "prevent another Pearl Harbor."

Hill's further testimony, given to civilian UFO researcher Edgar Smith, outlined the following unusual details about two incidents in which planes were observed on radar seemingly "colliding" with unidentified objects, then subsequently disappearing:

A transport plane with 26 persons aboard was rapidly approaching its air base some 10 miles from shore. Back on land at the radar station the operator was carefully tracking the transport plane and was in constant radar communication with the plane. Suddenly the radar operator spied a second blip on his radarscope. He immediately radioed the transport and advised the pilot to beware of the alien object.

The UFO was traveling at a high rate of speed, about 2500 mph. It jumped about on the radarscope like a tennis ball. All of a sudden the mysterious blip headed straight for the transport plane, and before the radar operator could warn it, the two objects had united into one on the radar screen. The one remaining blip sped straight up at a terrific rate of speed. A surface search of the water in the vicinity revealed no oil slick, although a general's briefcase was found floating. The plane has completely disappeared.

UFOlogist Jerome Clark noted the similarity between Hill's description, and the November 23, 1953 "Kinross Case", which similarly involved a plane's disappearance, in The UFO Book: Encyclopedia of the Extraterrestrial (Visible Ink Press, 1998).

A similar incident was described during the Wednesday, August 3, 2011 broadcast of Coast to Coast AM, with host George Noory, during an interview with journalist Leslie Kean about her book UFOs: Generals, Pilots and Government Officials Go On the Record. During the second hour of Kean’s interview, a phone call from a 93-year-old WWII veteran in Coos Bay, Oregon named Stewart related the story of a B-25 that vanished under mysterious circumstances. 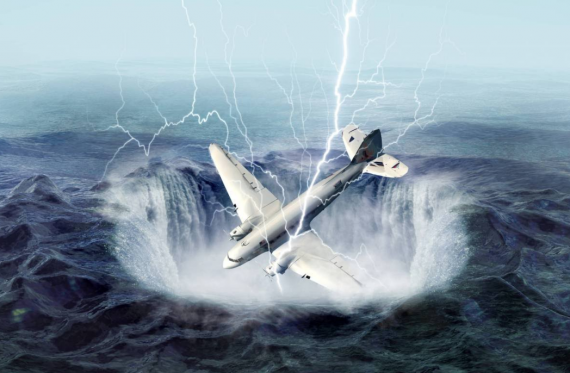 The disappearance in question took place late in 1944, while Stewart and his wingmen were flying over Northern India (the caller explained that he had flown B-25s in the China Burma India Theater of operations during the war).

“We were a flight of three B-25s, and I was in the right seat of the lead aircraft,” Stewart recalled. As the three aircraft and their crews passed over a range of mountains along their route down into Burma, the small fleet entered a small bank of light cumulus clouds. What occurred in the moments that followed has yet to ever be explained:

“As we entered them, the procedure was that the right wingman would rise up 200 feet, and the left wingman would descend 200 feet, so as not to collide in the clouds. I remember the guy on the right—I had flown with him before, his name was Reynard—continued this way, where he would rise up 200 feet, and come back down again. This happened about three or four times, and then he entered a cloud, and did not come out!”

“He was just gone, so we, the remaining two pilots, contacted each other, and we began turning to the right, circling around hoping to catch sight of him because, certainly, we couldn’t conceive of anybody disappearing like that.”

“Finally, we decided that he might have made a sudden turn to the right and gone back to base, because he might have lost his radio, or something like that. So we continued on, and bombed our targets, and came back to the base.”

Upon their return to base, Stewart and the other pilots inquired about whether Reynard and his crew had returned early. “He was gone," Stewart said, "and so we referred to him as missing, and reported the location to the people at the base. And they sent search planes out, including two R-4 helicopters. We searched for several days afterward. We searched the ground below, hoping to find signs of a crashed airplane. He was reported missing in action, and that’s the last we heard of it."

Other incidents of this sort have occurred over the years, which seem to suggest that a minority of aircraft disappearances could be related to anomalous phenomena. Namely, the disappearance of Australian pilot Frederick Valentich in October, 1978, has been cited as a credible incident in which the pilot described an unidentified object that accompanied his plane, up until he and his Cessna 182L vanished over the Bass Strait that evening. Valentich had been in radio contact with Air Traffic Control in Melbourne up until a few moments before his plane disappeared; the cause of his disappearance remains undetermined.

Such stories appearing over the years have certainly lent themselves to a growing mythos of alien kidnappings, which range from eerie bedside encounters within the homes of purported abductees, to the sweeping away of planes while being observed on radar. While the cases outlined here remain unexplained, they do offer some precedent for unusual disappearances of aircraft, and have no doubt fueled theories about the ultimate fate of MH370... whether or not any evidence supporting a "UFO connection" to the latter disappearance has ever been offered.

It is indeed difficult to understand how something so large as a passenger plane could simply vanish, and even after the passing of several years (and hundreds of hours of search and rescue efforts), still remain undiscovered. Ultimately, the final solution to the MH370 disappearance will have to wait... whether or not the cause had anything to do with anomalies that appear from time to time, both in our skies, and on military radar.