In 2012 Anomalist Books published Ardy Sixkiller Clarke's book, Encounters With Star People. It is a book that became a bestseller. Well, the author is now back with a follow-up title, one which offers an equally intriguing body of material. Its title: More Encounters With Star People. Its subtitle: Urban American Indians Tell Their Stories. Before I get to the book, let's take a look at a bit of background on the author. As Anomalist Books tells us:

"Dr. Ardy Sixkiller Clarke brings to the field of UFOlogy degrees in history, English, psychology, and educational leadership, as well as a background as a teacher, university professor, junior college and university administrator, licensed therapist and psychologist, and social science researcher. As a Professor Emeritus at Montana State University and former Director of the Center for Bilingual/Multicultural Education, Dr. Clarke has worked with indigenous people for most of her career."

So, with that said, onto the book. Clarke's latest release is slightly different to her previous title. The publisher notes that whereas her first book "...told the stories of those living on the reservation, Ardy Sixkiller Clarke's new book details the UFO stories of American Indians who live off the reservation." Given that the book contains no less than 39 chapters - all on varying UFO-themed events - it would be impossible for me to cover everything contained in the book. Nevertheless, I will share with you what I consider to be among the most important and eye-opening accounts that Clarke offers her readers. 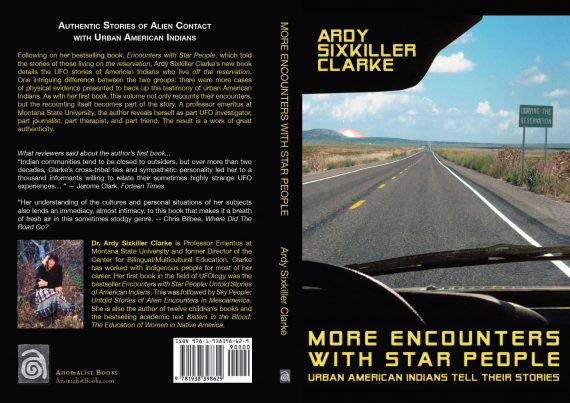 What I particularly like about Clarke's writing and research is that she doesn't sit at home gathering all of her data from the Internet. Quite the opposite: she spends a great deal of time on the road, speaking to witnesses, securing back-up testimony, and sharing the results of her many and varied excursions.

A perfect example is Chapter 26, which is titled "Another Flatwoods Monster?" Many of you may know of the strange, September 1952 saga of the so-called Flatwoods Monster (a story you can find here). Clarke, however, digs deeply into a far more recent and fascinating saga. It involves an encounter with a UFO, with ominous lizard-like beings, and with a Native American caught up in an encounter of the very traumatic kind - and in the same location where the legendary events of 1952 took place. If you are familiar with the near-infamous stories of strange UFO-themed activity on Archuleta Mesa, Dulce, New Mexico, you won't want to miss Chapter 38. Tales of unidentified helicopters, cattle mutilations, and a witness with a disturbing tale to tell abound.

In June 2013, Clarke traveled to Yellowstone National Park - it was a trip that included a stopover at Hebgen Lake, at which, in 1949, it's alleged, two UFOs crashed into the lake. In other words, it's a Roswell-style event. And, also just like Roswell, it's a case filled with mystery. As Clarke notes, however - and mirroring her Flatwoods investigation - we see evidence of local encounters with UFOs that long post-date the more famous incident of the past. In addition, Clarke shares with us accounts of "Aliens and an Abandoned Copper Mine," of "Tina and a Hybrid Baby," of "A Watcher in Death Valley," and the story of a UFO experiencer who says that "My DNA is close to theirs."

One of the things that stands out from reading Clarke's book is just how many Native American accounts of UFO experiences there are. But, more importantly, had Clarke not taken the time and effort to hit the road, to speak with the witnesses, to gain their collective confidence, and to have them share their accounts, in all likelihood we would never have known of this impressive body of testimony. Running at more than 300 pages, the book is packed with a wide variety of UFO-driven events reported by Native Americans. More Encounters With Star People is an excellent book, and which follows on neatly from Clarke's previous title. Well worth reading!