The Czech Speleological Society has reported that explorers in the Czech Republic have successfully charted the deepest known aqua cave on Earth. According to a press release issued by the divers, the cave known as Hranická Propast - or the Hranice Abyss - stretches at least 404 metres (1,325 feet) into the blackest reaches of subterranean Earth.

The cave was explored just two years ago by the same Czech and Polish divers that made this discovery, but a depth of only 384 metres (1,260 feet) was reached. On a more recent dive, a narrow tunnel branching off of the main cave was discovered. Since the tunnel was too narrow for humans to descend, an unmanned remotely operated vehicle (ROV) was sent into the pitch black cave.

Legendary cave diver Krzysztof Starnawski of Poland told National Geographic that this latest dive was the result of several years’ worth of preparation. While humans get the credit for this discovery, it was actually the robot that did the actual exploration of the record-breaking cave:

We went down with the robot to a depth of 60 meters (197 feet). From there, the team at the surface navigated it, via fiber-optic cable, down along my new line to 200 meters deep. Then it went down to explore the uncharted territory—to the record-breaking depth of 404 meters.

The Hranice Abyss is not only the deepest known cave in the world, but also one of the most unusual. Most aqua caves are formed by rain or groundwater falling downwards onto soft limestone layers, causing erosion over periods of geological time. This cave, however, was formed by heated mineral-rich waters rising from geological activity within the Earth’s mantle.

A Facebook post issued by the dive team shows the different depths various teams have reached over the many years divers have been exploring the cave, including the most recent dive which broke the depth record: 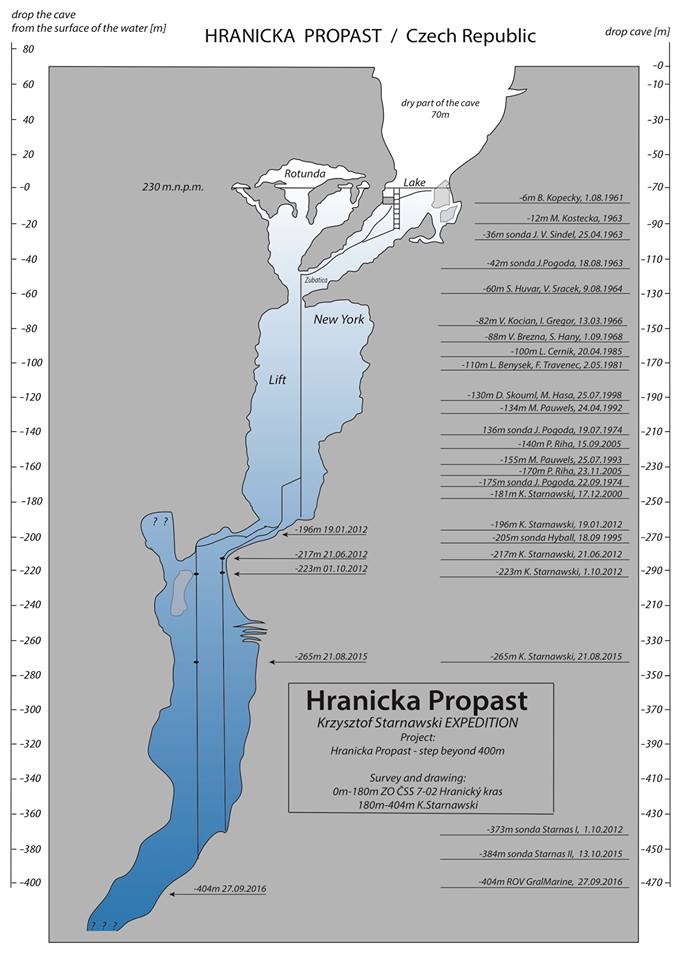 Despite their recent record-breaking dive, the researchers still do not know what lies at the bottom:

There are probably only three caves like this in the world. There is nothing typical about this cave, and every dive we make new discoveries.

Phys.org reports that despite the ROV reaching a depth of over 400 meters, the bottom of the cave was nowhere in sight. It is currently unknown how deep the cave might actually extend or what might be found at the bottom. As long as it's a long-forgotten race of translucent-skinned cave Morlocks, I'll be happy.