Just weeks after a shipwrecked schooner from the 1800s was discovered nearly intact on the bottom of Lake Superior, a mysterious apparition that appears to be a ship was spotted on the surface. Is the lake taunting that it still has many more wrecks to be found? Or warning that even modern ships can’t escape its powerful waves?

The video was taken on Saturday from the lake’s shore in Michigan’s Upper Peninsula by Jason Asselin. He says he was photographing a rainbow when he saw something else about two miles to the right of the rainbow.

I zoomed in and still couldn’t understand what I was seeing. It really just didn’t belong there, I’ve seen ships before and it looked nothing like that. I’ve been there before and never saw it before.

While it appeared to be a windy day and the lake was choppy, the object remained stationary in all directions. It looks somewhat like a ship – possibly a sailing ship - although some comments on the video suggest it’s too large for any conventional vessel, past or present, especially on a Great Lake. Asselin said the object was visible until the sun began to set and it faded away.

The rainbow gives one hint to what may have caused the mysterious appearance. Apparitions or mirages on the water are generally attributed to the condition know as Fata Morgana – a mirage caused by warm air residing above cold air, an inversion from the norm that results in a band bending the light rays of a faraway object to make it appear to be floating and distorting them to allow the imagination of the viewer to run wild with interpretations of what it might be.

In this case, while the object looks like a ship, an oil rig or a giant walking on the water, it was most likely a distorted Fata Morgana of a lighthouse and a tower located nine miles north of where Jason Asselin was standing. 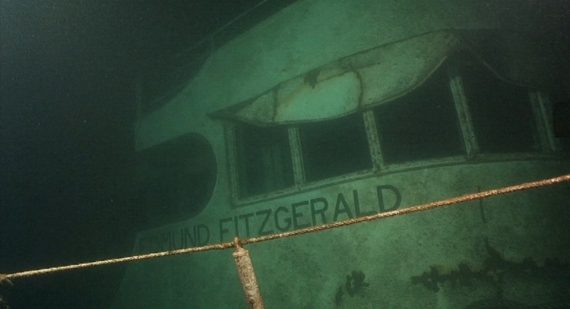 It’s estimated that there are over 400 shipwrecks at the bottom of Lake Superior, the largest of the Great Lakes. Its southern shore, the Michigan Upper Peninsula side, is known as the Graveyard of the Great Lakes. Sailors say that "Lake Superior seldom gives up her dead" because its cold waters inhibit bacteria growth so that bodies sink to the bottom instead of bloating and floating. No bodies of the 29 crew members of the Edmund Fitzgerald surfaced after it sank in 1975, although one was seen on the lake floor near the wreckage.

In mid-September 2016, shipwreck hunters found The Antelope, an 1800s wooden schooner barge that sank in 1897 but its masts are still mysteriously standing. It was located on Lake Superior’s southern shore off the coast of Wisconsin.

Are the shipwreck and the apparition related? Who knows? Lake Superior seldom gives up the secrets of its ghost ships either.

Oxygen is Disappearing from Earth’s Atmosphere