They were buried in a manner that would protect them from a frigid Siberian afterlife – wearing heavy fur coats. The pair – an adult and a child – would probably have worn those big furry Russian hats too … if they had heads to put them on. Archaeologists digging in a newly-discovered 2,500-year-old gravesite near Old Beltir village in the Altai Mountains found the decapitated corpses of an adult and a teen buried with their severed heads placed by their knees. The finding was not just gruesome but mysteriously unlike any other in the area.

Burials without heads are quite common. Usually it is because of war. There was a widespread practice in which bowls were made of the heads of defeated enemies. But this is obviously a different case.

Excavation director Nikita Konstantinov from Gorno-Altaisk State University describes in the Siberian Times the practices of the Pazyryk people, an Iron Age culture which lived in this region in the center of southwestern Siberia near the borders of China, Kazakhstan and Mongolia. due to the frigid conditions and the culture’s practice of mummification, numerous ancient burial grounds and corpses have been found there, providing a detailed look at the practices of the Pazyryks, a people made wealthy by trading the horses they raised on the Ukok Plateau.

Those practices included not just the making of bowls out of the skulls of defeated enemies but eating delicious hot borscht and other Russian foods out of them. However, the skulls of two headless skeletons found recently were intact and not made into bowls but buried with them, albeit in an unusual placement. They also didn’t appear to be enemies of the Pazyryks since they were wearing lavish outfits decorated with gold and were buried with bronze mirrors and ceramic vessels that contained organic materials suggesting they were given food for the afterlife. 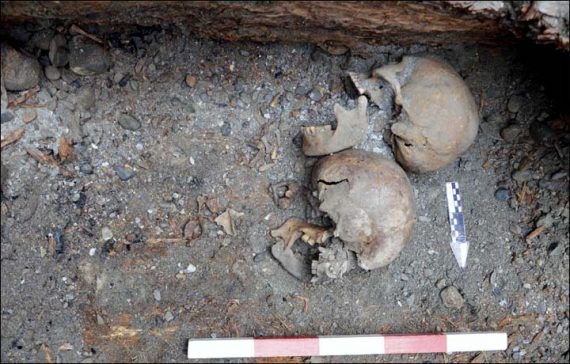 Who were these people and why were they buried with their heads removed? Konstantinov and his team are baffled, since they have never seen a burial like this before. Because of the location and condition of other artifacts in the tomb, one theory is that grave robbers looted the grave shortly after they were buried. But why remove the heads? Konstantinov suggests it was to prevent the dead from rising to get their stuff back. Or it could be some unknown ritual or humiliation by this or another similar warring culture.

Another theory is that the couple, which Konstantinov believes were a parent and child, had their heads removed as part of the Pazyryk’s mummification process and would have been put back on their shoulders after the brains were removed. Once robbers desecrated the grave, mummification was abandoned.

We have no similar cases, so we need to investigate this one very thoroughly. We will continue the research of these skeletons.

Konstantinov and other researchers will continue to study the corpses and plan to release their findings in January.