Hollywood is once again looking to alien abduction as a source of comedic inspiration. A new TBS series, People of Earth, centers around a support group for abductees. The group is being observed by Ozzie Graham (Wyatt Cenac), a journalist on the hunt for a good story. Initially skeptical, Ozzie soon realizes there may be some truth to the abductees’ claims, and that he too may have been 'taken.'

Executive producer Conon O’Brien has high hopes for People of Earth, telling crowds at the San Diego Comic-Con, "This is my favorite script that I've read in memory." The show’s creator, David Jenkins, came up with the idea after reading about a real-life support group for people who believe they've been abducted. Jenkins told The Hollywood Reporter, "I think I have a lot in common with these people and I thought it would make a good show."

The subject of alien abduction has been successfully exploited for laughs going back decades, and it’s not hard to see why. The very notion of otherworldly kidnapping conjures generic imagery of rednecks being anally probed after one too many beers—imagery that owes more to the creative process of screenwriting than to the real-world testimonies of ‘experiencers.’

In reality, the majority of ‘alien abduction’ accounts, while nonsensical on many levels, are stranger and more psychologically complex than Hollywood dares dream. These experiences are also often less tangible than the industry likes to imagine, frequently occurring in mundane surroundings, not on dark country roads under looming motherships, but at home while vacuuming or doing the laundry. Many experiencers have described simply 'shifting' into an altered state of consciousness. The presence of an actual UFO apparently is not obligatory.

Regardless of the root causes of the phenomenon, many abductees are genuinely traumatised by their experiences. In my research on Hollywood’s historical engagement with abduction reports I’ve interviewed a number of self-described experiencers, seeking their reactions to abduction-themed movies and TV shows. Does viewing such products trigger visceral reactions in them? (Yes). Are any of Hollywood’s abduction movies reflective of their own experiences? (Only superficially). To what extent might their experiences be influenced by Hollywood iconography? (Hmm...). 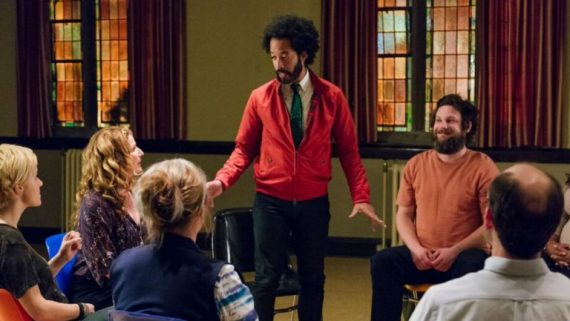 Responses vary among the experiencers I've interviewed, but all agree that Hollywood’s imaginings of the abduction phenomenon are crude and simplistic. All hope for more thoughtful depictions of abduction scenarios and to see the human experience placed front and center in these narratives. Time will tell if People of Earth goes some way towards remedying Hollywood’s historically facile treatment of the abduction experience. Although ostensibly a comedy, there are indications that the show has a strong dramatic heart, and, based on the trailers at least, it seems show creator David Jenkins has done his homework, as fine details from abduction mythology appear to have been sown throughout the series.

People of Earth debuts on TBS on October 31.

Werewolf Demons: The Bizarre Case of the Southend Werewolf