Star is Shooting Planet-Size Balls of Hot Plasma into Space

When a dying star goes down, does it go down fighting? That seems to be the case with the dying star V Hydrae, a large red giant 1,200 light-years from Earth that the Hubble telescope has seen shooting super-hot blobs of plasma twice the size of Mars rapidly into space. How rapid? About 500,000 miles per hour. Only 1,200 light years away? Should we prepare to duck?

According to Raghvendra Sahai from NASA's Jet Propulsion Laboratory and author of a study in The Astrophysical Journal on the discovery, the star-fired hot blobs (over 17,000 degrees F/9,400 degrees C –- twice as hot as the Sun) were detected during an 11-year observation period from 2002 to 2013. The data collected shows the star has been shooting out blobs at a rate of one every 8.5 years for at least 400 years.

While it looked at first like V Hydrae is the stellar cannon, that’s nearly impossible since it is near death, has lost over half of its mass and has nothing left to create blobs bigger than Mars and shoot them out at such a high velocity. The astronomers believe that V Hydrae has a companion star that travels in an elliptical orbit around it every … wait for it … 8.5 years. The companion gets close enough to pull blobs of material out of the dying star and spins them around itself like an Olympic hammer-thrower until they gather enough speed to be launched into space.

We knew this object had a high-speed outflow from previous data, but this is the first time we are seeing this process in action. We suggest that these gaseous blobs produced during this late phase of a star's life help make the structures seen in planetary nebulae. 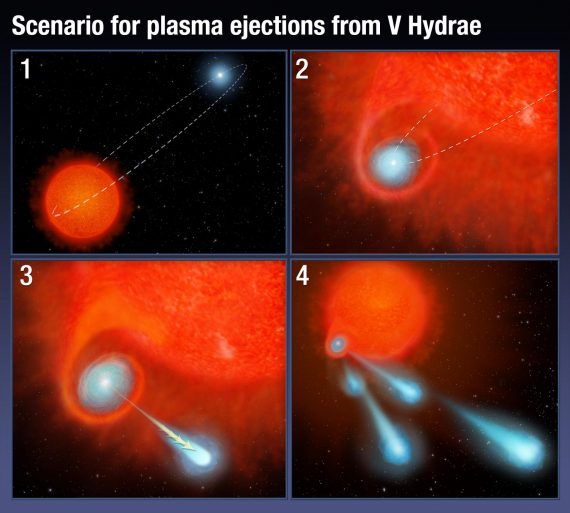 According to Sahai, planetary nebulae refers to a variety of glowing shapes that have been detected by Hubble around dying stars in binary systems. This is an important discovery because most of the stars in the Milky Way galaxy are binary systems.

Uh-oh. Does that mean we’re in danger of getting shot by one of these super-hot high-velocity dying star cannonballs of plasma?

The STIS (Space Telescope Imaging Spectrograph ) data show blobs that have just been ejected, blobs that have moved a little farther away, and blobs that are even farther away. STIS detected the giant structures as far away as 37 billion miles away from V Hydrae, more than eight times farther away than the Kuiper Belt of icy debris at the edge of our solar system is from the sun.

Fortunately, the blobs expand and cool as they move farther away from their stellar cannon and the gun eventually stops firing when the dying star finally dies and is consumed by its binary partner.

You can go back to worrying about undetected meteorites.