The Bizarre Tale of Trunko, the Weirdest Sea Monster

The seas of our world are vast and mysterious places indeed, and have spawned countless stories of strange creatures lurking within their depths. Yet for all of the sea serpents and sea monsters that have been reported over the centuries every once and awhile something truly bizarre comes to light, a report which seems to push the boundaries of the weird and shows us that we may be even further from understanding the deep than we think. Surely one of the oddest such cases comes to us from the shores of South Africa, where in the early 1920s there was a rather perplexing case of a sea monster that seems to defy classification, and which has gone on to become one of the more curious mysteries of cryptozoology.

According to a curious article that first appeared in the December 27, 1924, edition of London’s Daily Mail newspaper and entitled “Fish Like A Polar Bear,” on October 25, 1924, a curious sequence of baffling events began to unfold off the coast of Margate, South Africa that would both startle and frighten witnesses on the beach. Just off shore amidst a good amount of thrashing and splashing about there was allegedly the rather bizarre sight of an enormous, white furred creature with what looked like a long trunk and which was described by one witness as looking like “a giant polar bear,” that appeared to be engaged in vicious combat with a pair of killer whales, also known as orcas. According to report, the strange, violent battle was truly epic, stretching on for around three hours as the sea frothed with red and the strange sea monster lashed out at the whales with its formidable looking tail, at one point even purportedly leaping 20 feet out of the water during the melee. 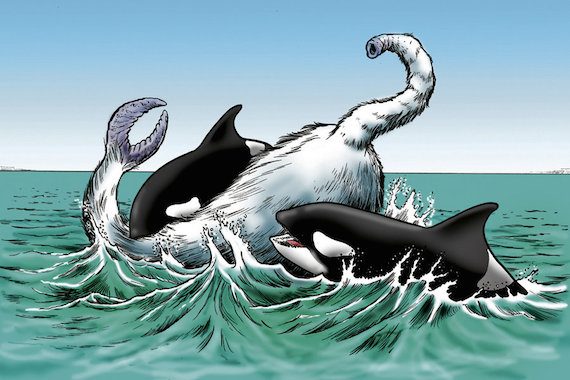 When the fierce battle drew to an end, the odd sea creature reportedly washed up onto shore, apparently killed by the orcas, where it would prove to be even stranger than originally thought. Witnesses who claimed to have examined the carcass described it as being 47 feet long, 10 feet wide, and 5 feet high, without any limbs and the entirety of it covered with lush white fur around 8 inches long. The creature appeared to have no discernable head, and from its torso protruded what looked like a thick trunk very similar to that of an elephant, which measured 5 feet long and 14 inches in diameter, with a tip described as being sort of like the snout of a pig. The tail of the beast was said in later reports to be like that of a lobster, and perhaps the strangest detail of all was that the corpse showed no signs of blood, despite the fact that the creature had presumably died of its wounds.

Although the creature was examined and measured by witnesses on the beach, it seems that strangely no trained scientist ever came to see it and no photos were provided at the time. After 10 days of rotting away on the beach, the fetid carcass then apparently was washed back out to sea where it would disappear forever and pass into one of the stranger cases in the history of the weird. After the initial article in the Daily Mail, other news sources picked up the story and it was widely reported on in various outlets. Oddly, another article which was published in the March 27, 1925 edition of the Charleroi Mail, of Charleroi, Pennsylvania, in the United States and entitled “Whales Slain By Hairy Monster,” would give a slightly different version of the unusual events. According to this article, the bizarre trunked sea monster had won the battle with the whales, killing them and then had retreated to shore where it collapsed from exhaustion rather than washing up dead. Just as described in the original Daily Mail article, the creature then remained on the beach for 10 days, during which time it was not examined by scientists, yet in the Charleroi Mail article the beast groggily crawls back to the water and swims away rather than having its lifeless corpse carried away by the tides.

Long without any particular name, Cryptozoologist Karl Shuker covered the creature in depth in his 1996 book The Unexplained, and it was here where the nickname it has come to be commonly known as first appeared, when Shuker referred to it jokingly as “Trunko,” a name which would stick. Partly because of the conflicting original accounts, as well as the lack of any real evidence such as scientific analysis or photos offered up to support the claims, and partly because of the sheer bizarreness and uniqueness of the actual creature, the case went on to become the object of much intense debate and speculation. Indeed, it is not even clear when the alleged event happened, as it has been reported as occurring on October 25, 1924, on November 2, 1924, and even on November 1, 1922.

Over the years, many ideas were proposed for what the strange creature could possibly be. The most popular opinion was that it was merely the rotting carcass of some large sea animal such as a whale, elephant seal, or a large variety of shark such as a basking shark or whale shark, which had decomposed in such a way as to make its appearance seem more anomalous and mysterious than it really was. In this scenario, the “fight” with the killer whales was simply a misidentification of the whales feeding on the already dead carcass. Shuker himself believed that this was what Trunko was, and he talks about this theory in his 2007 book Extraordinary Animals Revisited.

Another theory was that it was some strange new species of whale, very large pinniped, or some other type of sea creature. Still others thought that the original articles themselves were either highly exaggerated or entirely fabricated. After all, why else would there be such a lack of scientific interest at the time or any samples or photos taken of the carcass? Without any photographic evidence of the creature, or indeed any evidence that it ever even really existed at all, it was really all just pure speculation and conjecture driven by the news reports, and for a long time this was as close as anyone could come to finding answers. Then in 2010, all of that changed. 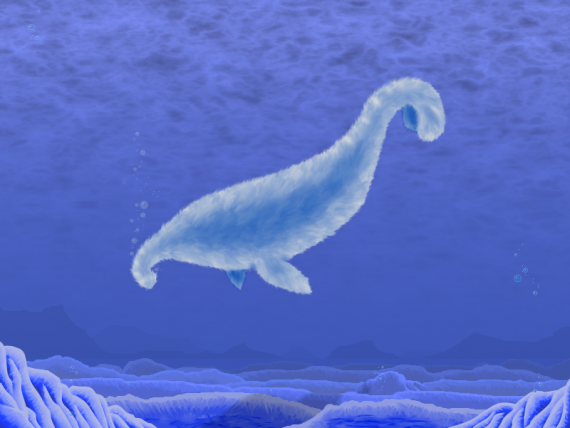 In this year, Shuker was contacted by a Markus Hemmler, who claimed that he had stumbled across an actual supposed photograph of Trunko on a German website. It was huge news to be sure, as up until that point it was thought that no photographic record of the creature had ever existed. After some digging around, several other photographs were also found, all of which had apparently been taken in July of 1925 by a South African correspondent and photographer for the Rand Daily Mail and Wide World Magazine, and seemed to show an anomalous large beached animal that could not be readily identified.

After carefully analyzing the photographs, Shuker came to the conclusion that while the photos lended the story itself some credibility, the carcass was most likely what is called a “globster,” which sounds quite mysterious but is actually the name given to the remains of known animals, usually whales, which have decomposed in such a way as to make them seem like strange beasts, often having lost their skeletons and appearing as enigmatic, gelatinous tough sacs of skin and blubber. In Shuker’s opinion, the apparent hair on the creature was the result of exposed tissue fibers, which could have also comprised the “trunk” of the beast. This supports the idea that the spectacle that had been witnessed was just some killer whales playing with the corpse, something that they are well-known to do, such as tossing seals into the air before feeding. This would have given the illusion that the creature was alive and engaged in mortal combat with the whales. This theory would also explain the lack of blood found on the corpse, as it would have been made primarily of rough skin, connective tissue fibers and collagen. Shuker would say of the object in the photographs:

The appearance of Trunko’s remains in this photograph reaffirms my opinion – first presented in my book Extraordinary Animals Revisited (CFZ Press: Bideford, 2007)…that it was a globster, not a bona fide cryptid.

Despite this conclusion, it is difficult to tell if it is correct or not in the absence of any physical evidence such as tissue samples, and Shuker admits that the reports of thick, snow white fur on the creature seem to not really match up completely with mere exposed tissue fibers. There are also the witnesses, who swore the creature had been alive and fighting for hours, thrashing its tail at the whales. Without any further evidence, we will likely never know for sure what Trunko was. Interestingly, Shuker wrote of a similar report in his book From Flying Toads To Snakes With Wings (1997), which describes a mysterious carcass that was discovered washed up on the remote Alaskan island of Glacier Island in November of 1936. The carcass in this case was described as being 24 feet long, with a long tail, and “elephant-like” head, and notably covered in white fur. The remains were apparently examined by Chugach National Forest supervisor W.J. McDonald, but it is unclear just what was discovered or where the remains went. Could it have been the same sort of animal as Trunko? No one knows, and it seems like we probably never will.

So what was Trunko? What did those people see from that beach all of those years ago? Was it merely a blob of decomposing dead whale that had ended up as a plaything for orcas? Were all of those people wrong? Or was this a case of some bizarre new type of sea animal, and if so what kind could it possibly be with its trunk, lack of head, and body covered in white fur? If this indeed was a new, undiscovered species, then it is not quite like anything we know of, and would be one of the strangest and most inexplicable mystery animals out there. Until we find another specimen to study or some tissue samples stashed away and lost just as the photos had been we can only speculate, and the answers to these questions will likely remain just as elusive as Trunko itself.

The Roswell Case and a Curious Letter