The Guru in the Grotto: Tales of England’s ‘Off the Grid’ Mystics

In a recent post here at Mysterious Universe, I wrote about the trouble with "man beast" reports in the British Isles, with the obvious conundrum presented by having to account for where a creature like Bigfoot could reside, and remain hidden, on a relatively small landmass like England.

Evoking this article in discussion recently with my friend Sam Shearon, he suggested that while the existence of a "mystery animal" like Bigfoot seemed highly unlikely, he wouldn't rule out the notion that there may be individuals who, simply by choice, decide to live "off the grid" and maintain a wild existence.

Not only is this perhaps a likely source for some reported encounters with "wild men" over the centuries, but even today there is some precedent for it. A contact of mine in the UK, Matt Cook of The Curious Fortean blog, has written to me about his own experiences with people living off the grid in parts of the UK, who he has met and talked with on a few occasions.

Earlier this year, he wrote to describe an incident that occurred during a hike near the Avon Gorge, just outside Bristol where, according to Matt, there had been an unrelated incident involving a wild man report last year. Matt, accompanied by his girlfriend, had been hiking the area with interest in the hillforts that exist there (for those unfamiliar with the term, hillforts are earthen works which once served as fortified refuges or defense positions within ancient settlements, and as the name entails, these were generally located on hilltops. Many date back to the Bronze and Iron Ages, though there are also some that were repurposed for use during the post-Roman period in Europe).

"My girlfriend and I had visited two of three hillforts that are all with in a stones throw of each other," Matt told me. "The third we discovered had been built on, and only remnants of it remain. It was whilst searching for these remaining parts that we took a small path that led us down the gorge," Matt said, emphasizing the vertigo-inducing descent into the gorge in question.

"It was whilst stumbling down this path that my girlfriend noticed a large hole in the ground, and peering in we noticed a guy sat in what seemed to be a cave and we were looking down through what would of been part of the roof." Surprised to have found a man in such an odd location--almost the likes of a plot point in a fantasy adventure novel--Matt and his girlfriend "politely said hello" to the chap, who then "invited us into his home for a very British cup of tea." 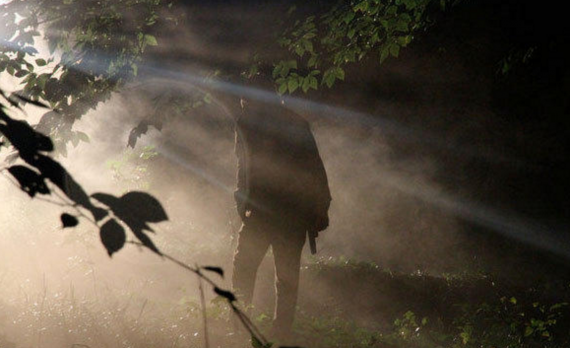 We clambered a little further down the gorge and located the cave entrance. We sat and talked with him for a while, learning that he had been living in the cave for sometime and had left the "normal everyday" world voluntarily, and that he was only one of a long line of people who had stayed there. Now the cave would be directly below where the hillfort would have been, so it's entirely possible that he was the latest in a line of residents stretching back to the iron age at the very least. He lived a very basic existence, and he seemed happy enough with his life. He sat crossed legged with a blanket wrapped around his body and over his head and he kind of looked like a scruffy indian mystic.

It is fascinating to think that such an experience might transpire in the modern age, harkening back to earlier times when mystics and ascetics of yore actually did reside in caves, and could be visited with hopes of gleaning any number of spiritual insights. Interestingly, this hadn't been the only story that Matt shared which involved an individual living off the grid in such a way. On another occasion, he related the story of a man who lived in a forested area in the English countryside, and choosing to live very "naturally", this individual would often refrain from wearing clothing, making a very primitive encampment his dwelling place. On occasion, when visitors would come to his woodland encampment, the "wild man" would don a long T shirt "to cover his modesty", and would speak by firelight of his appreciation for nature, and the primitive lifestyle he had chosen.

It remains a rather contentious position as to whether such individuals could really account for reports of creatures like the so-called "Man Monkey" of the British Isles; I would have to admit it's quite a stretch to entertain the notion that people choosing to live a more-or-less feral existence are the "truth" behind stories about Bigfoot.

Still, the wild man component may somehow fit into this narrative in some way, amounting to one of the many aspects of a broad mythology of wild people in cultures throughout the world.