Trump and Clinton Being Pushed to Debate About UFOs

The presidential campaign that seems to get stranger by the day is now getting stranger by the minute. With the recent Wikileaks leaks of emails to Hillary Clinton’s staffers about UFOs and aliens, noted UFO investigator Nick Pope is demanding on Twitter that the third and final debate between Republican nominee Donald Trump and Democratic nominee Hillary Clinton include questions on those emails and on UFOs and aliens (the ET kind) in general. Will it happen? If it does, will moderator Chris Wallace bring up Trump’s UFO connections as well?

Given the recent WikiLeaks revelations and the persistent rumors of cover-ups and conspiracies, I think it's time to clear the air and get this subject into the open. Also, given the toxicity of the campaign and the aggression in the second debate, a question on UFOs wouldn't just be interesting, it would be fun - and I think that's what US politics needs right now.

Nick Pope is the former UFO desk officer for the UK Ministry of Defence and the author of five books, including Open Skies, Closed Minds, his examination of many well-known UFO cases. He was also instrumental in the release of the MOD’s UFO files and would obviously be interested in John Podesta’s promise that he and his boss (he’s Hillary Clinton’s campaign manager) will release the U.S. UFO files if they return to the White House. 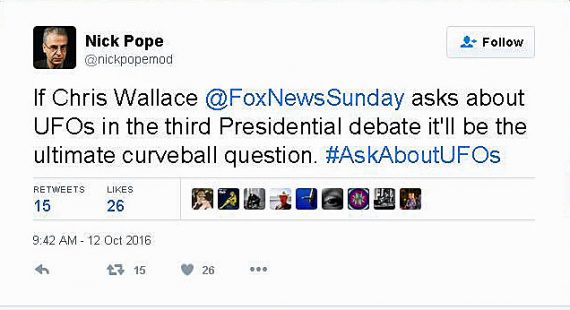 The emails exposed by Wikileaks reveal information sent to Podesta from the late astronaut Edgar Mitchell and singer and ufologist Tom DeLonge about UFOs and aliens. Pope thinks they should be discussed at the final debate in Las Vegas, especially due to its proximity to Area 51.

If the moderator doesn't ask about it, Trump may bring it up himself. He's so far behind in the polls and so rocked by scandal that he needs a nuclear option.

Would that be a wise more on Trump’s part? Clinton could use it as an opportunity to bring up some of Trump’s own UFO connections. In December 2015 during the Republican primaries campaign, a UFO was spotted following Trump’s helicopter when it took off after his appearance at the Iowa State Fair.

Trump’s alleged good friend Vladimir Putin may have shared some of his UFO connections with the Donald. Putin was born in St. Petersburg (the Russian one) and still gets back to his hometown whenever he can. Is he there visiting aliens? In July 2015, a video surfaced of what appeared to be two unknown spacecrafts colliding over the city. In March 2016, a video hit the Internet showing a plane flying above a UFO flying above St. Petersburg. Those are just the St. Petersburg UFOs. Sightings are commonplace in Russia.

Is Julian Assange behind this too?