A baby boy with two heads was born yesterday in a healthy state.

Dr. Jaiprakash Narayan, an assistant professor of the pediatric medicine department at Jawaharlal Nehru Medical College in Ajmer, Rajasthan, in northern India, announced this incredible news on October 3rd. Even more incredible, the doctor and his staff said the baby was in a “healthy state” and the parents took home, where he died 32 hours after his birth. 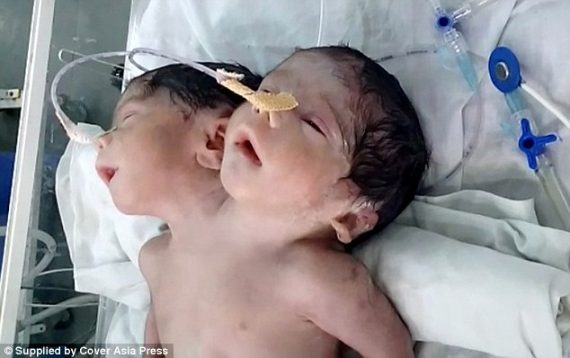 The birth of the two-headed boy, weighing 2.5 kg (5lbs 7oz). was a shock to not only to the parents but to the staff attending the mother at the hospital, says Dr. Narayan.

It was the couple’s first child, which probably explains why they didn’t see a doctor during the pregnancy and take extra precautions.

What precautions could they have taken? The doctor doesn’t say. However, he admits that this two-headed boy was actually conjoined twins and he considered the possibility of separating them.

The operation is possible in some cases of conjoined twins but here it was nearly impossible. Despite having two pairs of all of their internal organs they were all trapped in one body, with only one pair of arms and legs. You cannot separate such children.

The mother was doing well enough after giving birth to take the baby home, against the strong recommendations of the hospital’s medical staff, which said the baby’s death was due to severe breathing issues. 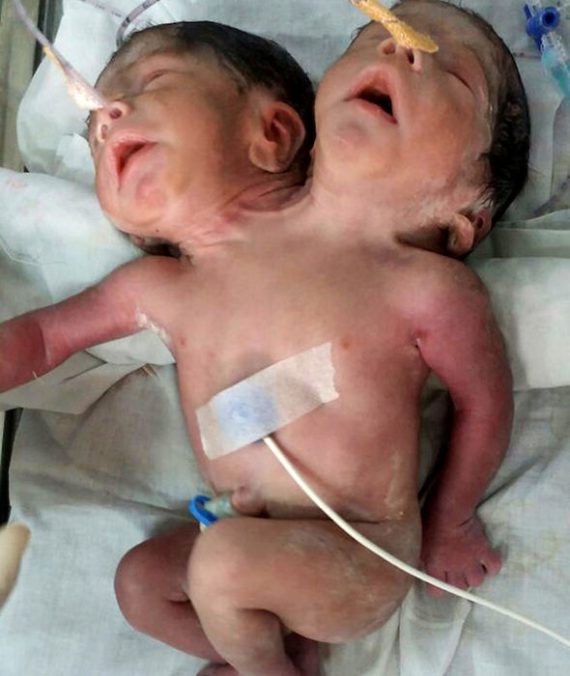 As in cases like this, the first inclination is to wonder if (and possibly hope that) this is a hoax. The photographs appear real but coverage of the story comes from British newspapers and not from Indian media. Dr. Jaiprakash Narayan doesn’t show up anywhere but in the stories. On the other hand, a recent study determined that birth defects are on the rise in India. According to Dr Anita Kar, head of the Interdisciplinary School of Health Sciences (ISHS) at the University of Pune which conducted the study:

“Lakh” is the Indian term for 100,000, which means 600,000 Indian babies each year are born with some congenital anomaly. Polycephaly - the condition of having more than one head – is extremely rare but on the increase, with at least ten recorded instances worldwide (including another in India in 2014) since 2000 and more possible as better prenatal care allows more conjoined twins to be born. The rare but increased success in separating conjoined twins gives parents and doctors the hope to carry these pregnancies to term.

That wasn’t this for this baby.

Why are there so many congenital anomalies in India? That’s the real mystery that needs to be investigated.

The Strange Saga of the “Phantom Photographers”